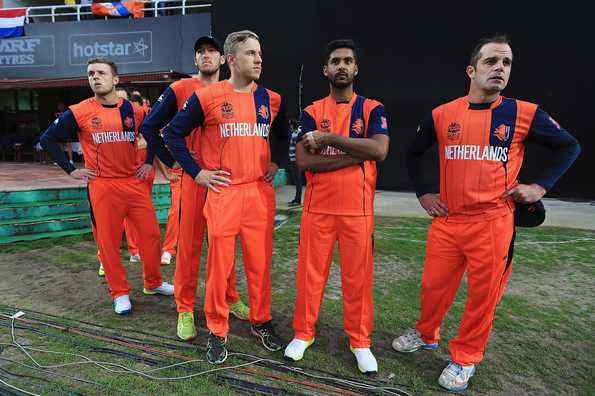 It seems to be an exciting phase in Zimbabwean cricket, one where they are putting in an earnest effort to get quality cricket. It started with their tour to Scotland, where they played out a drawn two-match One-Day International series and now they arrive in Netherlands for a three-match one-day series. Both sides haven't seen enough of each other in the international arena and on the two occasions they have met - both of which in world events, 2003 World Cup and 2014 World T20 - the African nation registered wins.

Zimbabwe, of late, have had a torrid time, starting with the five-ODI home series against Afghanistan, where they were beaten 3-2. Before their major tour of Sri Lanka, they headed to Scotland for two ODIs, and instead of winning it comfortably, as they were expected to, they just about managed to draw it 1-1, largely due to captain Graeme Cremer's five-for in the concluding contest.

As they prepare themselves in alien conditions again to take on Netherlands, they would once again be largely dependent on their skipper. While the batting responsibilities would be hinged on the seasoned Sean Williams, Sikandar Raza and Malcolm Waller - all of who managed fifties in the two-match fixture - the call would be for consistency in their performances. Tendai Chatara and Chris Mpofu bagged 10 and 12 wickets respectively against Afghanistan and both the frontline seamers would know that they would be expected to lead the attack from the front again.

The hosts, Netherlands, are in prime form, with seven wins and just one loss - their last two games having resulted in wins. By virtue of their superlative performance, they sit atop the points table in the World Cricket League Championship and would be raring to have a crack at a higher ranked opponent. The Dutchmen look a formidable unit on paper with Stephan Myburgh, Ben Cooper, Wesley Barresi and Roelof van der Merwe, all of them capable of contributing heavily with the bat. Michael Rippon has been in good form with the ball, but the pace bowling duo of Mudassar Bukhari and Ahsan Malik will need to provide the early strikes. Peter Seelar and van der Merwe add to Netherland's left-arm spin repository and that would come in handy during the middle overs.

While both these teams haven't faced off against each other often in recent times, their rivalry was looked forward to in the late 80s and early 90s when they took on each other in the World Cup qualifier tournaments. As both teams struggle to move up the ladder, it is not a bad time to revisit tussles of the past and revive themselves.

What to expect: The weather is expected to stay pleasant with a maximum temperature of 27 degrees and a pleasant breeze across the ground.

"With Zimbabwe ranked 11th in the world in One Day Cricket, this series is vital for us in preparation for our key final ICC World Cricket League Championship matches against Kenya and Namibia. I promised my players that they would be rewarded for outstanding performances and Shane Snater and Sikander Sulfiqar gift us no option but to pick them after their standout performances for Netherlands A and in the Pro Series" - Ryan Campbell, Netherlands coach.

"These three friendly List A matches are key in our preparations for Sri Lanka given that we were unable to go early and play warm-up matches there. Match practice is key for us Zimbabweans who in the recent past have had very little game time in comparison to other countries" - Heath Streak, Zimbabwe head coach.