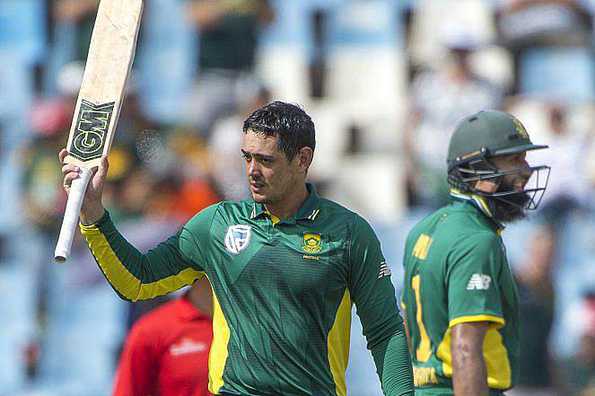 In the preceding three-match bilateral One Day International (ODI) series (consisting of three or more matches), Quinton de Kock had managed at least one century in each of the series. However, against Sri Lanka he was having a rare failure, having managed only 114 runs in the first four ODIs, with a lone half-century. Eager to make amends, the 24-year-old came up with a sublime knock in the fifth and final match of the series at the SuperSport Park in Centurion on Friday (February 10), hitting a 87-ball 109 that provided the platform for South Africa's massive total.

If de Kock outlined the sketch for South Africa's first innings effort, Amla was the one who provided him assistance initially and later went about adding colours to it with his well-paced innings. A brisk start was followed by him dropping the anchor before he shifted gears towards the end, in what was masterpiece that had varied hues. Making full use of a couple of dropped chances, Amla hit a 134-ball 154 as the hosts finished with 384 for 6 after being asked to bat.

De Kock took a while to get going while his opening partner Amla started with a flurry of boundaries to help South Africa off to a positive start. It didn't take the wicketkeeper-batsman too long to hit his straps, and when he did, he unleashed his wrath upon the hapless Sri Lankan bowlers, sending them on a leather hunt en route to a 40-ball half-century. Amla too reached fifty and had the Sri Lankan fielders to thank as their sloppy efforts gave him a couple of lucky breaks. Making the tourists pay for their mistakes, Amla provided solid support to de Kock as they brought up a century stand in quick time.

The partnership was a superb blend of aggression and solidity, with de Kock and Amla playing their usual roles, much to the frustration of the visiting team's bowlers, who were running out of ideas as the opening pair extended the partnership past 150 in 22 overs. De Kock, who had earlier crossed 3000 runs, becoming the third fastest South African and the fastest wicketkeeper-batsman to do so, reached the three-figure mark with a four off Asela Gunaratne before the half-way stage of the innings. A four off the same bowler in the same over, was the 16th and the last of de Kock's hits to the fence as the left-hander failed in his attempt to go hit Suranga Lakmal over extra cover, much to the relief of Sri Lanka.

De Kock's dismissal slowed down the proceedings a touch before Faf du Plessis took the attack to Lahiru Kumara and also received a lifeline from Sachith Pathirana. He seemed to be continuing from where he left off in the previous game but his innings came to an end nine short of the half-century mark when he mistimed a Lahiru Madushanka delivery to Lakmal at mid-off. This brought de Villiers to the crease and he didn't take long to get going, sending out warning signals with two fours off Madushanka. However, his stay was cut short by Jeffrey Vandersay when he couldn't get the timing right while attempting a heave over cover.

Meanwhile, Amla, who was flying under the radar as he often does, went on to bring up his 24th ODI ton before taking the attack to Gunaratne to power South Africa past 300 in the 43rd over. While Duminy did not spend too much time at the crease, falling to Lakmal in the 44th over, it didn't deter Amla from going for the big hits and provide a blistering finish to the innings.

It was only after crossing the 100-run mark that Amla attempted to clear the fence, but such was the regularity of the big hits that he went on to bring up his fourth 150 in ODIs, needing only 20 deliveries to race from 100 to 150. Amla received good support from Farhaan Behardien as they added 62 runs for the fifth wicket before the partnership, which lasted for 4.5 overs, came to an end when Amla found the fielder at sweeper cover while trying to hit Madushanka out of the park in the penultimate over. Behardien followed in the final over, but they had done enough damage as South Africa posted their second 360+ score in as many games.