Visee stars for Netherlands, Ireland get it right on the night 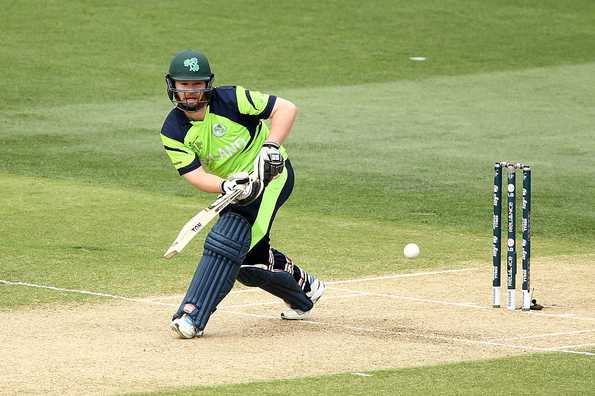 The Netherlands and Ireland opened their Quadrangular T20I series campaigns in Muscat today with wins over Scotland and Oman. Tobias Visee's 43-ball 71 from the top of the order set up a nervy seven-wicket win for the Dutch in the morning, breaking a four-match losing streak against the Scots. In the afternoon, Ireland bounced back from consecutive warm-up defeats at the hands of Oman's development XI to close out a 15-run win over the senior side, Simi Singh taking three wickets in the 10th over to break the back of Oman's chase.

For the Netherlands and Scotland the match marked the start of the international calendar, both sides coming out of long winter hibernation. George Munsey showed no sign of rustiness however, plundering 32 runs in the first two overs as the Scots raced out of the gate to 33 without loss. He lost his partner and captain Kyle Coetzer to Shane Snater's first ball however, and was himself pinned in front by Fred Klaassen on the first ball of the fourth over without adding to his score.

From then on the momentum was with the Dutch with Pieter Seelaar rotating his bowlers to prevent the Scots from settling. Calum MacLeod's slow-burn half-century kept his side in the game, but when he was bowled looking to scoop Timm van der Gugten in the 18th over, with him went Scotland's best chance of a strong finish. The eventual target of 154 looked sub-par at the interval, and as Visee and Stephan Myburgh built an accelerating 100-run opening partnership the Dutch looked set to romp home.

The 28 year-old Visee's international career to date has largely been one of unfulfilled promise, a muscular 58* against an MCC side last summer his only serious score in Orange to date. He repaid the selectors' faith with interest today however, taking seven balls to get off the mark but then warming to his task - driving and sweeping with authority as he reached his half-century in 29 balls.

He and Myburgh reduced the asking rate to barely over a run-a-ball before both fell in the space of four deliveries, and comparatively unhurried innings from Ryan ten Doeschate and Wesley Barresi saw the Dutch stretch the game into the final over, and with just three needed from the last over Barresi contrived to give the Scots hope before finally putting bat on ball to flick Rhaudri Smith through midwicket and seal the win with a ball to spare.

Netherlands' may yet regret their late go-slow, as it ensured Ireland's 15-run win over the hosts was enough to leapfrog them into pole position on net run rate. Stand-in skipper Paul Stirling led from the front with a 50-ball 71 of his own from the top spot, taking full advantage of some sloppy fielding and several dropped catches to put his side in a solid position at 125-2 before holing out off Fayaz Butt on the first ball of the 16th over.

The former Pakistan youth international would finish pick of Oman's bowlers with figures of 19-2 in 4, as Ireland lost three wickets for just 33 runs in the final five to finish on 159-5. Memories of their shock loss to Oman at the 2016 World T20 looked to be haunting the Irish as Jatinder Singh and Khawar Ali started positively, 16 runs coming off the second over delivered by Peter Chase.

With form batsmen Aqib Ilyas and Zeeshan Maqsood both sidelined, however, Oman's batting looked comparatively brittle on paper, and so it proved. The loss of both openers in consecutive overs put the hosts on the back foot, and the introduction of spin soon paid dividends. George Dockrell found Khurram Nawaz's stumps on the second ball of the ninth, before Simi Singh struck three times in five balls to leave Oman reeling on 76-6 at the halfway point.

The chase never really recovered, with 19 year-old Josh Little doing the business at the back end of the innings, giving away just 10 runs in his last two overs to finish with a return of 24-2 from his four. Butt battled to the end with a cameo of 25* from 18, but by then the game was gone, Peter Chase easily defending 24 in the final over as Oman limped to 144-9 at the close.

The win sees Ireland finally escape their ignominious position at the bottom of the T20I rankings, climbing above Oman in to 17th place. Still below four Associate members on the table though, the men in green will feel there's plenty of work still to be done. They take on the Netherlands on Friday as the Scots take on the hosts, both looking for their first win.

Sunday will see the Dutch and Irish play their final games against Oman and Scotland respectively, wile the Scots will stay on for a three-game one-day series starting Tuesday as Oman commence their preparations for World Cricket League Division 2, to be held in Namibia in April.