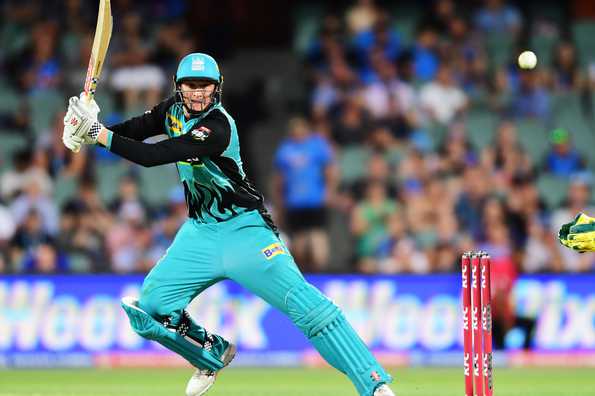 A superlative batting effort from Matt Renshaw kept Brisbane Heat's slim chances of reaching the semifinal alive as Chris Lynn & Co. moved up to fifth at the expense of the Adelaide Strikers, beating them by six wickets in a fine run-chase. With this win, Heat have 11 points - just one short of fourth-placed Melbourne Stars. However, even one win for Stars in the remaining three fixtures will knock Heat out of the reckoning as the latter has just one more fixture to go.

There wasn't a standout batting performer for the Strikers after they were asked to set a target. The likes of Alex Carey, Colin Ingram and Jonathan Wells got starts but it was still insignificant as Strikers slumped to 95 for 5 in 14 overs. As many as 81 runs came off the last six overs as Harry Nielsen, Michael Neser, Rashid Khan and Cameron Valente swung their bats around with a lot of success.

Early into the post-intermission period, Heat were staring down the barrel when Renshaw arrived. Peter Siddle and Valente ran through the top-order by just the third over, and there was further doom in store, considering one of the season's most successful - and perhaps one of the toughest bowlers to face in the T20 format - Rashid Khan, was yet to be handed the ball.

The only sliver of hope for Heat was the fact that Brendon McCullum - who has four fifties this season - was still around. He though had to essay the role of a slightly marginalised co-conspirator as Renshaw took matters into his own hands. Renshaw more than doubled his tally of runs for the season with this game alone, smashing an unbeaten 90 off just 50 deliveries, en route to steering his team to victory.

The pair made their plans clear with a 20-run sixth over off Michael Neser and managed to keep Strikers on their toes even after the field restrictions were relaxed. At the halfway stage, they had 91 with Renshaw scoring 51 of those from just 26 deliveries.

By the 13th over, they had 100 runs to their combined tally, and it appeared the writing was on the wall for Strikers. Rashid broke the stand, but Renshaw carried on till the end. In the 19th over, Alex Ross, who walked out to bat after McCullum's dismissal, took the chance to hit the money shot - a massive six over long on - to seal the win.

In great news for Brisbane Heat, who earlier today jumped up to fifth and stayed alive - even if only just - Melbourne Stars fell at the home of bottom dwellers Perth Scorchers despite Glenn Maxwell's 40-ball 61 in a steep run chase.

The reason Stars found themselves in a tricky situation that needed bailing out was due to a strong top-order showing from the Scorchers. A 47-run opening stand between Josh Inglis and Michael Klinger - in his final home fixture in the BBL - was followed by one worth 87 for the third wicket between Ashton Turner and Cameron Bancroft that laid the foundation for a massive total.

Stars struggled early through the dismissals of Ben Dunk and Peter Handscomb but Marcus Stoinis and Maxwell got the chasing going with a 106-run partnership. All seemed well until the final ball of the 15th over, when Andrew Tye dismissed Maxwell to trigger a collapse. Stoinis followed suit just two balls later and the lower order crumbled under the ensuing pressure. From 118 for 4, they fell away and eventually finished on 153 for 9 in 20 overs.

Despite this result, Stars are still in a far more comfortable position compared to fifth-placed Brisbane Stars, as far as semifinal qualification is concerned. Stars need to win only one of their last two fixture to get in, while Heat will not be guaranteed the passage through to the last-four even if they win their last game - coincidentally against Stars.