Can Moeen Ali inspire Worcestershire to a T20 Blast encore? 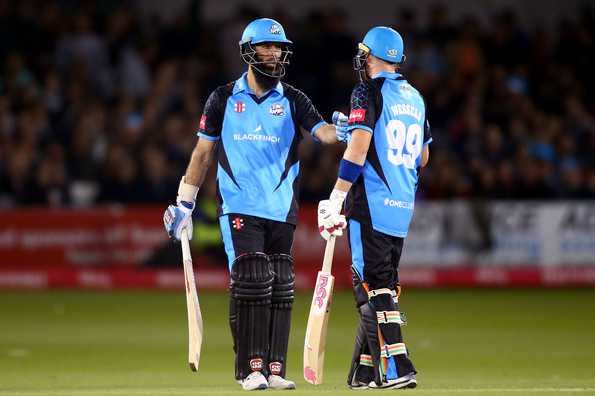 It's last orders for this breathless, brilliant season of cricket and frankly, we've already had too much. Sure, we expected a decent time. But we have lived the very highest of highs. A once in a generation summer. Better than anyone could have hoped for. We should probably take ourselves off home now, pass out on the sofa fully clothed - shoes and all - and resurface once we've had a gallon of water and some vegetables. But what's that, you say? We've got time for a T20 Blast Finals Day? You mean the cricket doesn't have to end quite yet?

Go on then, twist my arm. Just a quick one, mind.

Far from vanishing into the darkness of an English winter that is rapidly encroaching onto daylight hours, the county season refuses to go quietly. A huge week lies ahead. Two champions will be crowned, the first on Saturday (September 21) at Edgbaston when the Blast reaches its conclusion, followed by the Championship title decider next week. One of Nottinghamshire, Worcestershire, Essex or Derbyshire will have their name engraved on the Blast trophy while Essex will hope the Championship goes their way next week, too. There's plenty of scope for yet more drama to add to what has come before.

By a quirk of the draw, the best of the four teams will play each other at the semi-final stage. Last year's winners, Worcestershire, may have just scraped through the group stages, grabbing the last qualification spot, but make no mistake, they have cracked this T20 lark. Their players know their roles, they have plenty of underrated but skilled cricketers and everyone chips in. Only two players - Riki Wessels and Moeen Ali - have scored more than 300 runs and only one - Pat Brown - has taken more than 12 wickets but here they are. The experience of winning last year, when they beat Lancashire, and then Sussex, on Finals Day, means they know what it takes, too.

They do have one trump card, though, in Moeen, a leader who thrives on the responsibility of being Worcestershire's main man. He scored an unbeaten 121 off just 60 balls in the quarter-final victory over Sussex and the ball raced off the bat as if it was running scared. But just as important as Moeen's all-round ability is the way he leads his men. There may not be a better T20 captain in the country and his tactical nous and cool head was a key ingredient in last year's success. It will be so again if Worcestershire are to repeat the dose this time round.

Nottinghamshire, however, will certainly be no pushovers. With Alex Hales, Dan Christian and Harry Gurney, they have more big-name T20 stardust than their opponents, complemented by plenty of experience elsewhere too. After finishing second in the North group, they cruised past Middlesex in the quarter-finals by ten wickets thanks to an onslaught by Hales, who has come back from the CPL for Finals Day, and Chris Nash, who had not played a game in the competition until then. The Blast offers Notts respite from what has been a calamitous Championship season. They have just lost to Warwickshire having racked up 498 in the first innings.

While Nottinghamshire have a fine all-round white-ball team, in Hales and Gurney, they have proven match-winners. As he showed in the quarter-final when smashing seven sixes in 83 not out, Hales retains the ability to smite any bowler anywhere he wants as far as he wants. He possesses such a mighty talent and there is no better time to show it with a T20 World Cup coming up next year. Gurney, the joint third highest wicket-taker in the competition, is like a chess grand master. Skilled, clever and one step ahead of his opponents. Either could win Nottinghamshire this tournament on their own.

While the first semi-final will be contested by the winners of the previous two tournaments, Derbyshire and Essex are rather more inexperienced at this stage of the Blast. The former have never got to Finals Day before. The latter have on four occasions but made such little impression, never reaching the final, that it's hard to recall. Few expected either to make it this far this time round but they battled their way through the group stages and put in two fine performances in the quarter-finals. Both will fancy their chances now.

Derbyshire's quarter-final victory over Gloucestershire was as professional as they come. But it wasn't so long ago that they struggled to even be worthy of the T20 wooden spoon. They hadn't flattered to deceive as much as failed to get out of bed for the games. As a result, the last three years has seen T20 given a focus with specialist coaches appointed and players with short format pedigree signed. It has worked a treat. They have been a different team the last three years and finally, they have reached a Finals Day, the last of the 18 counties to do so.

One of the new recruits, Ravi Rampaul, the former West Indian fast-bowler, is the competition's leading wicket-taker, proving yet again that, in this game, age is no barrier if you have the skill. Wayne Madsen, captain Billy Godleman, Luis Reece and Leus du Ploy have scored exactly 1,500 runs between them. Others, such as leg-spinner Matt Critchley, have chipped in as and when needed. Unsurprisingly, head Coach Dominic Cork has helped build a togetherness and belief that has shone through in some hard-fought victories. Derbyshire are not a team to be underestimated.

Nor are Essex, flying the flag for the south and, like Derbyshire, a team who would have been nobody's favourite for the Blast title. They certainly weren't with four group matches remaining. Yet three wins and a tie - plus some other results going their way - saw Essex remarkably get through to the knock-out stages. They then did a job on a more fancied Lancashire team to seal their place in Birmingham. Remarkable, ridiculous. Maybe it really is their year?

If it is to be, Ravi Bopara will have to continue his fine form. He was to the fore in the quarter-final, seeing his team over the line in the chase, as he was throughout Essex's late surge, scoring more than 200 runs in five innings, being dismissed just twice. He doesn't want to bat at number six but he is doing such a fine job of it. With Dan Lawrence averaging 40, opener Cameron Delport smashing it to the tune of a 171 strike rate and Ryan ten Doeschate refusing to let age diminish his output, Essex's batting has a strength to it that Derbyshire's workmanline bowling attack will do well to contain.

What to expect: Remarkably given Finals Day has been scheduled for midwinter, the forecast is set fair for the whole day. Temperatures could even reach - wait for it - 23 degrees although that will drop significantly by the time the final finishes at 21.30 so spectators will need to bring at least one coat and maybe two. The pitch should start off hard and flat but will likely get slower and lower as the day wears on, bringing spin and change-ups for the seamers into play.