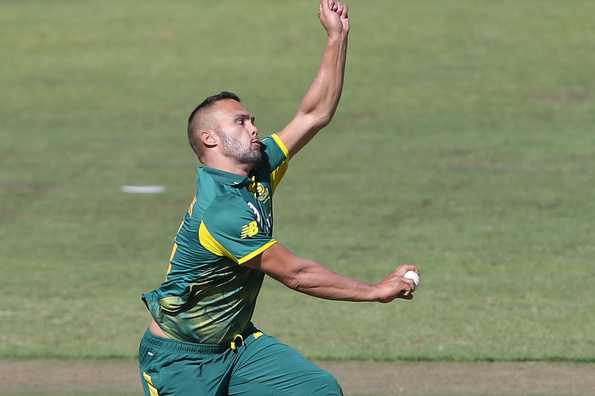 Dane Paterson and George Linde combined to restrict the power-packed Titans batting line-up and the latter also came up with an important contribution with the bat to help Cape Cobras register a three wicket victory on Friday (December 8). Picking up five wickets between them, Paterson and Linde kept Titans to a total of 132 for 9. In reply, Cobras were reduced to 88 for 6 at one stage before Ferisco Adams and Linde's cameos helped Cobras over the finish line in the final over. As a result of the victory, Cobras consolidated their second spot on the points table and became the second team after Titans to seal a spot in the semifinals.

Hashim Amla had a sedate start in the chase while Richard Levi scored at a better strike rate but both the openers fell in quick succession, leaving Cobras at 44 for 2 in the eighth over. In a further setback for them, skipper JP Duminy departed cheaply, becoming Junior Dala's second scalp while Tabraiz Shamsi accounted for Aviwe Mgijima. Temba Bavuma scored a 28-ball 29 but regular wickets weren't helping Cobras' cause.

Needing 42 to win off the last four overs, Ferisco Adams managed a couple of boundaries off Dale Steyn, who conceded 14 in the 17th over. A quiet over from Chris Morris followed but Linde made up for that by scoring two boundaries off Lungi Ngidi, who went for 14 in the penultimate over to bring down the equation to 10 off 6 deliveries. Adams then scored a boundary off Morris off the fifth delivery in the final over to seal the victory with a delivery to spare.

Earlier, opting to bowl, Paterson delivered early breakthroughs for Cobras, dismissing Quinton de Kock and Aiden Markram cheaply to leave Titans at 21 for 2 after four overs. A 48-run stand between Henry Davids and Farhaan Behardien came to an end in the 11th over as the former fell to Linde. Cobras continued to chip away, picking up wickets at regular intervals as the likes of Albie Morkel and Morris failed to make an impact. Malusi Siboto managed a couple of sixes in the death overs to help his side past 130.

Half-centuries from Morne van Wyk and Dale Vilas helped Dolphins register a six-wicket victory against Knights at Mangaung Oval. In a match reduced to 17 overs per side due to rain, Knights finished with a sizeable total of 168 for 4 thanks to Ryan McLaren's 48 not out off 24 deliveries and David Miller's unbeaten 46 off 23. However, van Wyk's unbeaten 70 off 43 deliveries, along with Vilas's quick-fire 51 off 22 helped Dolphins win three deliveries to spare.

Asked to bat, Knights lost Patrick Kruger early while Imran Tahir managed to send back the set pair of Theunis de Bruyn and Rudi Second. At 58 for 3 in the eighth over, Knights needed some tempo to their innings, which was provided by Miller, who began his fireworks with a six and a four off Keshav Maharaj and continued to find the boundaries regularly. Following the dismissal of Keegan Petersen, McLaren unleashed some big hits of his own, managing 24 runs off Andile Phehlukwayo in the 15th over, 25 more runs came off the last two overs with both batsmen finishing unbeaten just short of half-centuries.

In reply, Dolphins lost Sarel Erwee early in the innings and Vaughn van Jaarsveld departed for a 10-ball 8 while van Wyk was finding the ropes regularly at the other end. He found the ideal partner in Vilas, who also came out with a positive intent, dealing in sixes. He managed two maximums off Shadley van Schalkwyk in the ninth over while van Wyk managed a six in the same over. Vilas then took a liking to Eddie Leie, scoring a hat-trick of sixes to tilt the balance in favour of Dolphins.

Both batsmen went on to bring up their respective fifties before McLaren struck to dismiss Vilas in the 12th over. Mbulelo Budaza then accounted for Phehlukwayo but van Wyk continued positively to keep Dolphins in the hunt. Robbie Frylinck provided good support, scoring a six and a four off McLaren in the 14th over to bring down the equation to 22 off three overs. Frylinck managed three more fours, including the one off van Schalkwyk in the final over that helped Dolphins over the line.

In a rain-curtailed affair at Senwes Park, Warriors managed to secure a narrow four-run victory (D/L method). Warriors posted a total of 133 for 4 in 17.1 overs, with JJ Smuts scoring an unbeaten 69, before rain cut short their innings. Chasing a revised target of 97 in 10 overs, Reeza Hendricks scored an unbeaten 41 off 28 but an superb final over from Andrew Birch helped Warriors prevail in a tight finish and move up to the fourth spot on the points table.

The chase didn't start on a bright note for Lions as Rassie van der Dussen fell early. Hendricks then set the tone for the chase with regular boundaries with Ryan Rickelton's breezy 18 off 7 further helping Lions' cause. However, Lions kept losing wickets regularly even as Hendricks tried to keep the team in the hunt, bringing the equation down to 12 required off the final over. However, Birch bowled an excellent over under pressure, conceding only eight, as Warriors secured a narrow victory.

Earlier, having opted to bat, Warriors lost Wayne Parnell early but skipper Smuts and Colin Ingram kept things steady with their 47-run partnership. However, Warriors had a mid-innings slip with the quick wickets of Ingram and Colin Ackermann, and were reduced to 56 for 3 in the 10th over. They managed make up for the slow going as the innings progressed, with Smuts and Christiaan Jonker scoring at a good rate during their 77-run association that lasted for nearly eight overs. A spell of rain meant that Warriors' innings came to a close after only one delivery was bowled in the 18th over.