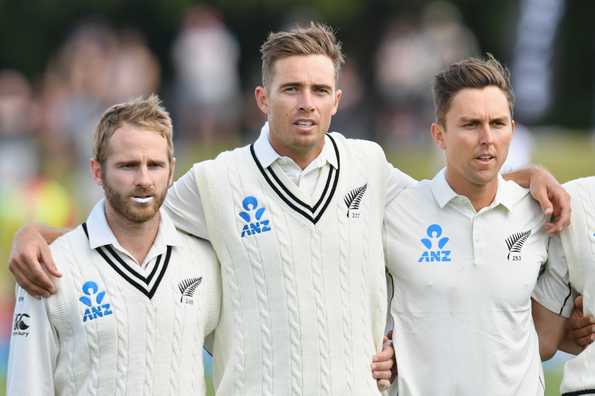 Tim Southee, Trent Boult, Kane Williamson and Mitchell Santner are set to be rested from this week's List A domestic competitions in order to get adequate rest for the upcoming series against South Africa. While the pacers Southee and Boult are set to miss the matches as part of their workload management, all-rounder Santner and skipper Williamson need time to recover from their respective niggles.

"Tim, Trent, Santner and Williamson will all be out for a week and will be given a chance to recoup," Mike Hesson, New Zealand's head coach, said on Monday (February 6). "Both Santner and Williamson have got little injuries that they need to get right and Tim and Trent (have) obviously high workloads. The rest will return to some degree.

"Mitch had a little fracture on the end of his thumb, which he has had for a little while but we want to get that right before South Africa. And Kane has had a bit of a foot issue for a while and we'll see how that scrubs out over the next week. I can't tell you the exact details, but he's had it for a long time. He just hasn't had time to rest it."

New Zealand are already dealing with injury issues to several of their key players. Neil Wagner is in doubt for the Test series following a fracture on his finger, suffered last week during a Ford Trophy match. As per initial assessment, it was believed that the injury might take four to six weeks to heal.

"It's huge for Neil, obviously playing on his home ground," Hesson added. "He's pretty determined to be right for that first Test so it is a race against time but we will just have to wait and see. It's a huge blow for us to be unavailable but I am sure Neil will do everything in his powers for us to be ready."

Meanwhile, wicketkeepers BJ Watling and Luke Ronchi are expected to recover completely and return to the national side. While Test specialist Watling has suffered a sprain on his right knee last month, Ronchi suffered a tear on his right adductor during the series against Bangladesh. However, he has made a return to competitive cricket in the Ford Trophy, playing against Otago last week.

"He's (Watling) making reasonable progress," the New Zealand head coach said. "It's one of those injuries or issues that has occurred for quite a while. This is the only window in which he's been able to give it some rest and hopefully, he'll get back for the last Plunket Shield game before the Test series starts. He's got a knee and a hip issue. Won't go into specifics but he obviously needs a bit of time.

"It's great to see Luke back. Worked really hard and got back quicker than we initially thought. It gives us options in the squad - whether it's playing an extra allrounder or Luke coming in."

When both the regular wicketkeepers were out, Tom Latham took the responsibility with the gloves. With the option of Tom Blundell also in the reserves, Hesson is pretty pleased with the depth of the squad, which according to him was the most pleasing aspect of New Zealand's 2-0 win over Australia in the recently-concluded Chappell-Hadlee series.

"We've had a lot of guys come in and out due to injury and most of the guys who have come in have been able to deliver straightaway and it's a good sign for us," Hesson said. "Also that we don't rely on only one or two players which some other sides around the world do. It's important for us that we continue to develop depth in all forms and we are starting to."

South Africa's tour of New Zealand is set to start on February 17, when the two sides will clash in a one-off Twenty20 International. They will then go on to play a five-match One-Day International series and a three-match Test series.