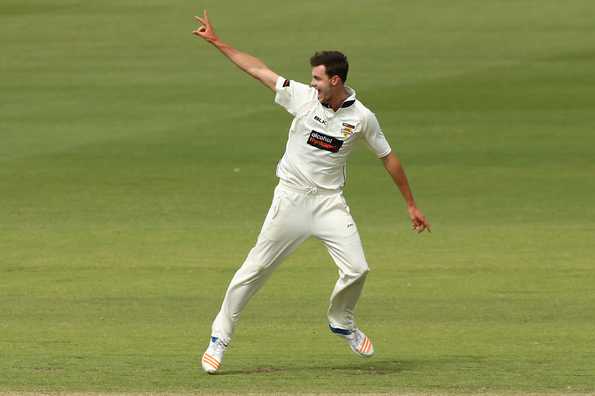 Tasmania are closing in on securing a spot in the Shield final after dominating day two against Victoria at Bellerive Oval.

In the virtual "semifinal", second-placed Tasmania moved a step closer to meeting Queensland in the decider. They wobbled in their second innings to reach stumps at 73 for 4 but still enjoy a healthy 235-run lead.

Faced with a 162-run deficit, Victoria's seamers produced an inspired burst to snare crucial breakthroughs before the close but the damage might have already been done after a disastrous batting performance earlier in the day.

A career-best six-wicket haul to seamer Andrew Fekete propelled the Tigers to the dominant position as he helped bowl out Victoria for a meagre 182 - well short of Tasmania's first innings of 344.

Fekete destroyed Victoria's powerful top-order with the key scalps of Travis Dean (1), Marcus Harris (16) and Glenn Maxwell (17) to leave the Bushrangers reeling at 46 for 4. Allrounder Dan Christian played a lone hand with an aggressive 69 as wickets fell around him before being bowled by Tom Rogers.

Fekete once again destroyed the Tigers with a devastating burst midway through the second session to claim three wickets in eight balls.

The match was delicately poised at the start of the day and Tasmania added 40 runs to their overnight total of 304 for 7 after having being sent in. Seamer Chris Tremain continued his fine season with a six-wicket haul to be the standout Bushrangers bowler.

Victoria are striving for their fourth straight Shield title, while the Tigers are hoping to make the decider for the first time since 2013.

An aggressive Nic Maddinson has helped put NSW in a commanding position at stumps on day two against Shield frontrunners Queensland.

The former Test batsman, in his first game back in the side, smashed a cavalier 63-ball 87 to highlight NSW's 382 for 7 in response to Queensland's 243. Paceman Sean Abbott (79 not out) and wicketkeeper Peter Nevill (52 not out) have taken the game away from Queensland with a brilliant unbeaten century partnership as the Blues lead by a handy 139 runs.

The highlight of day two was undoubtedly Maddinson's pyrotechnics show as he smashed 11 boundaries and two sixes before falling just before tea to agonisingly miss out on a memorable century in one session.

The Blues had contributors right down the order but the match was still evenly poised when they were 252 for 7 - a lead of just nine runs. But the terrific partnership between Nevill and Abbott has changed the course of the match and given the Blues firm control.

Maddinson's fireworks contrasted with a slow and tense first session where the Blues only mustered 59 runs on the North Dalton Park pitch. It was tight cricket as both teams played cautiously in the crucial contest.

Victory would secure a home final for the Bulls but if they lose then it would open the door for Tasmania and Victoria to host the decider. After being perched at the top of the table at the competition's midpoint, NSW have slumped on the resumption but are still a mathematical chance of making the final but need everything to go right to extend their season.

South Australia appear headed for the ignominy of a last-placed Shield finish after a disastrous batting collapse against Western Australia on day two.

In a clash between the two bottom teams, the Redbacks were bowled out for a meagre 201 at Gliderol Stadium to trail on the first innings by a sizeable 154 runs. WA are 115 for 3 at stumps with a lead of 269 runs. They had wobbled at 30 for 3 as the Redbacks made a desperate attempt at a comeback before recovering through an 85-run partnership between hard-hitting opener D'Arcy Short (56 not out) and Ashton Turner (39 not out).

SA were dismissed in just 53.5 overs with young opener Conor McInerney top-scoring with 51 but captain Travis Head (31) and wicketkeeper Alex Carey (25) were the only other batsmen to pass 20.

The Redbacks had no answer for rookie WA paceman Liam Guthrie, who starred with a four-wicket haul. In his return after a lengthy injury layoff, talented left-arm quick Joel Paris impressed with 2-31 from 16 overs.

The Redbacks are hoping to avoid a last-place finish after making the Shield final in the last two seasons, while the Warriors haven't claimed a wooden spoon for 54 years.