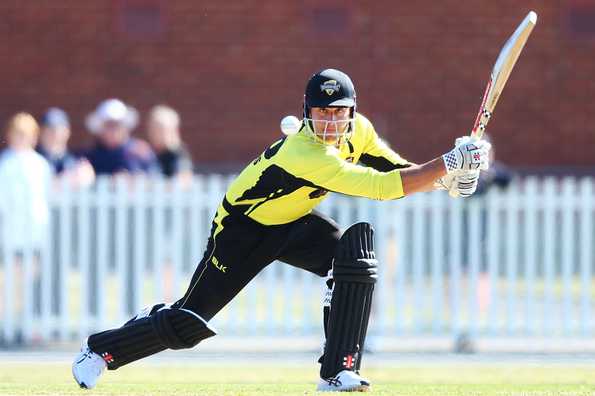 Moments before the announcement of his five-year deal with Melbourne Stars was made official, Marcus Stoinis was in an overdrive, belting Tasmanian bowlers all over the park on his way to a 49-ball 93. His spectacular knock not only earned Western Australia their fifth successive win but also ensured they finished on top in the group stage, after being the only undefeated side this season.

Chasing 291, Western Australia didn't break any sweat with two of their top three batsmen notching up fifties, and thereby, setting up a firm base to knock off the target with 57 balls to spare. Off the seven batsmen that came out to bat, four of the top five maintained a blazing strike-rate in excess of 100 in a bid to sustain the dominance against the hapless Tasmanian bowlers.

Earlier in the day, Western Australia chose to field and were under immediate pressure after Tasmania openers - Matthew Wade and Ben McDermott - pounced on the early advantage on offer to rack up 60 in 9 overs. The duo hit boundaries at regular intervals to clinch the momentum, but they soon ran out of fuel after losing two wickets in the space of seven balls paving way for a cripple of sorts; only skipper George Bailey showed some fight with a half-century and he found an able ally in Clive Rose towards the end who blitzed a 17-ball 32 to post a competitive total on board.

Despite the loss, Tasmania will hold onto the second spot and by virtue of it, they earn a semi-final spot alongside Western Australia.

'Chris Lynn's in the zone. Look away, bowlers!' That statement is sure to send shivers down the spine of many and it is what enveloped the few that gathered at the Drummoyne Oval ground in Sydney on Monday (01 October). Unfortunately, though, Lynn's blitzkrieg was bettered by a pair of hundreds from New South Wales batsmen who won their second successive game in the season to finish penultimate on the table.

After Chris Green dismantled Queensland's middle-order, momentum shifted quickly and the visitors never recovered from the late collapse, only to finish at the bottom with four losses from five games. Having chosen to bat Queensland adopted an all-guns-blazing approach from the outset with Sam Heazlett and Max Bryant laying a perfect platform (52 runs in 8 overs) for the following batsmen to fire. However, only Chris Lynn took the mantle to fizz a 113-ball 135 while the rest crumbled miraculously to fall way short of the expected total. Queensland's top three accounting for nearly seventy percent of their total score was a firm testimony to the severity of their collapse. From 246 for 3, they bundled out for 296 with 16 balls to spare.

And once momentum eluded them, the road to recovery never seemed probable as Jack Edwards engineered a match-winning 237-run partnership with Moises Henriques for the third wicket to steer New South Wales home with 26 balls to spare. Henriques remained unbeaten on a run-a-ball 134 and handed an unforgettable debut to Andrew Gode while at it. Gode, the 28-year-old all-rounder got out first ball and churned out a half-century with the ball in the 4.4 overs he bowled.

Both these sides will now have to play the qualifying final to encourage any hopes of making it to the semis. Queensland will lock horns with South Australia on Wednesday whilst New South Wales will face Victoria on Thursday in a bid to grab the two remaining slots for the semis.