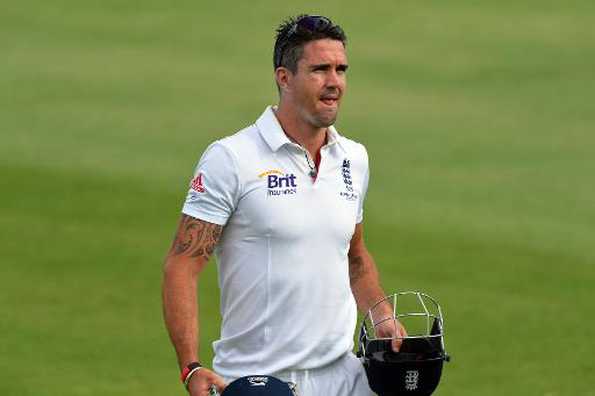 Kevin Pietersen hit his highest ever county championship score, 326* (373) on Monday to boost his hopes of an England recall. The exiled batsman had completed his 50th first-class hundred, from 153 balls, in the final over before lunch on day two of Surrey's Division Two match against Leicestershire and he remained in dominant form as he eased past 200 before the close of play at The Oval.

It was the controversial 34-year-old's first double hundred since July 2012, when he notched 234 not out against Lancashire. South Africa-born Pietersen's hopes of a recall remain with the England and Wales Cricket Board's (ECB) new director of cricket Andrew Strauss, who was appointed at the weekend before the ousting of former coach Peter Moores.

"I was thinking about it while batting and, given the pressure I was under this morning, that is one of my best innings I have ever played, purely because I knew that tomorrow there is a press conference and there were things happening this evening. I needed to answer any questions with runs on the deck. Goodness 326 is a pretty good argument," Pietersen said after his mammoth knock.

"As a batter you get judged on hundreds you get. I always wanted to get 50 first-class hundreds and to have ticked that off as well today was pretty special. The more you bat the better you see the ball and because of the fields they placed with every man on the boundary for two hours it was about managing my patience."

His former Test captain Strauss will hold his first press conference on Tuesday, before announcing the Test squad to face New Zealand at Lord's next week. Pietersen has been cast adrift from England's plans since he was sacked from all apparent future plans in the aftermath of their 2013-14 Ashes whitewash defeat.

But incoming ECB chairman Colin Graves provided renewed hope that the batsman could yet return when he hinted in March that runs for Surrey this summer could provide the pathway he needs. Pietersen responded by agreeing a new contract with the county, and in his fifth championship innings of the summer he duly reached three figures again.

He sought to diminish the significance of Monday's innings, before taking the field on 35 not out overnight, when he told one of his Twitter followers he did not expect it to have a decisive bearing on his England return. At the suggestion it could be "the most important innings of your life", Pietersen posted: "Ha! Seriously? Not sure my career can be decided on one innings on a Mon in London, we get judged on Ashes series'."