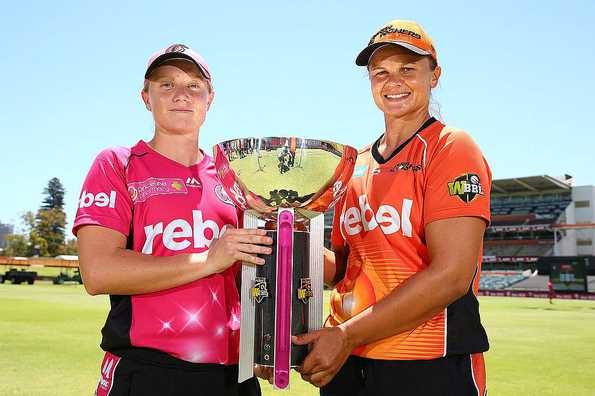 It is only fitting that the top-two teams of the league round - Sydney Sixers and Perth Scorchers - have made it to the title clash of the second edition of the Women's Big Bash League. Sixers came agonisingly close to winning the inaugural title last year and would be eager to redeem themselves when they face off against the hosts at the WACA in Perth on Saturday (January 28).

The Sixers' road to the finals last time around was topsy turvy - having to win nine of their final leagues games in a row to make it to the summit clash. But this time around, they made home in the top-half of the points tally, finishing two points clear of second-placed Scorchers, and sounded warning bells with a 103-run thumping of Hobart Hurricanes in the semifinal to advance to their second successive final.

While Sixers would be high on confidence, Scorchers haven't done too bad either to finish second in the points table. The additional advantage of playing the final in front of possibly a packed home crowd - since the men's teams of both franchises clash in the BBL06 final a short while later - would hold Scorchers in good stead, having advanced to the final on the back of an impressive nine-wicket victory over Brisbane Heat at the same venue.

The fate of the contest could well be decided by the batting units of the two sides. Sixers lost their regular captain Ellyse Perry just ahead of the knockouts but stand-in skipper Alyssa Healy has been mighty impressive since being trusted with the additional responsibility. She's led from the front in the two games - scoring 84 and 77 respectively - to single-handedly ensure consecutive final appearance for Sixers. A lot of the batting will still revolve around the wicketkeeper-bat as Sixers look to right a few wrongs this season.

Scorchers' batting has relied upon their captain Suzie Bates and in-form opener Elyse Villani. Bates has made few changes to the batting order - notably dropping herself to No. 3 - but the hosts have a well-settled playing XI.

Interestingly, Sixers have a 2-0 record on head-to-head against Scorchers this season and would be keen to maintain the clean sheet in the all-important clash on Saturday. Bates, on the other hand, has had an exceptional 2016 season and would be itching to cap it off by adding a maiden WBBL to her kitty.

Perth Scorchers: The hosts have a fully-fit squad to pick from and are unlikely to make any changes to their semifinal line-up.

Sydney Sixers: The visitors are already without their regular skipper Perry and there are concerns over the availability of Sara McGlashan after she aggravated her knee injury in the semis. Fortunately for them, the South African pair of Dane van Neikerk and Marizanne Kapp are back from national duty.

"We need to make sure we play well with both the bat and the ball, like we have in the last few games, if we're to get the job done over the Sixers this time around. Our players know TheFurnace conditions really well and that is definitely a bonus for us to be playing the final at home. The Sixers are a class outfit and showed that by finishing on top of the table this season, but I am confident we have the right mix of talent to go well tomorrow," Scorchers' head coach Lisa Keightley.