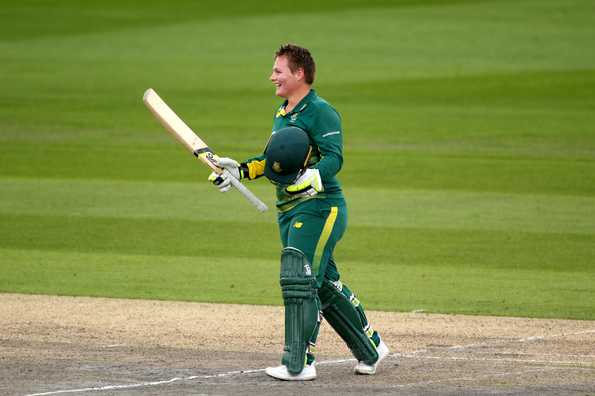 With a 3-0 deficit coming into the sixth and final T20I, there was no way South Africa could have won this series. But they made the most of the dead rubber on Friday, coming out emphatically on top by 105 runs at Lalabhai Contractor Stadium in Surat.

The win was set up by the opening batters Lizelle Lee and Sune Luus, both of whom compiled a 144-run opening stand that was easily South Africa's best for any wicket this series. It was more than any total South Africa managed in the series, so effective India's spinners had been. Until today.

On a good batting surface, Lee hit 84 off 47 balls which included 15 fours and a six. Winning the toss and batting first helped, as did Luus's 62 off 56 balls from the other end. Mansi Joshi conceded 25 runs in two overs with the new ball, enabling South Africa to rack up 57/0 in the powerplay itself. Such was the force of this opening stand that India broke through only in the 16th over, when Lee was caught off Poonam Yadav.

South Africa lacked a strong finish, being able to score only 21 runs for the loss of two wickets in the last three overs. One of those wickets was picked by Harmanpreet Kaur, who was playing her 100th T20I, the first India international player to get there, but her contribution seemed limited to that in the game. Chasing a target of 176 runs, Kaur walked in when India were 4 for 2 in the third over. She made 1, bowled by Ayabonga Khaka in the next over.

It was an inauspicious start for India, losing Shafali Verma and Jemimah Rodrigues to consecutive deliveries from Shabnim Ismail. Kaur's wicket sunk them further but that was only the start of the collapse. India lost Smriti Mandhana and Deepti Sharma in the last over of the powerplay, also Nadine de Klerka's first. That left India reeling at 13 for 5 when Taniya Bhatia got out to Anne Bosch in the next. 13 for 6.

From there, Veda Krishnamurthy and Arundhati Reddy put on 49 runs for the seventh wicket but it was repair work. The damage had been done. India were cleaned up in the 18th over, losing their last four wickets for eight runs.