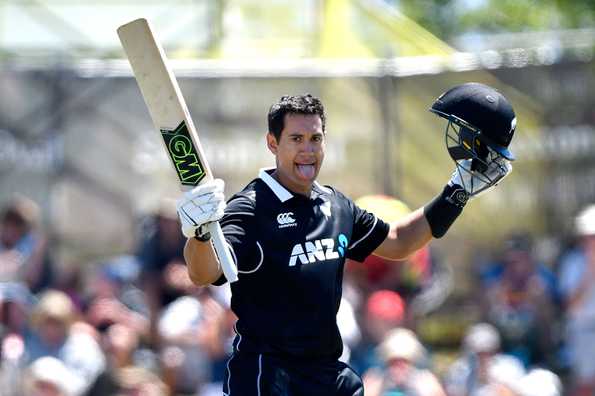 Ross Taylor's 20th ODI ton in a record streak and Henry Nicholls's explosive 124 for his maiden ODI ton set up New Zealand's mammoth total of 364 for 4 against Sri Lanka in the third ODI in Nelson on Tuesday (January 8). During his stands of 116 with Kane Williamson (55) and 154 with Nicholls, Taylor (137) extended his rich vein of form by registered his sixth fifty-plus score on the trot - joint second best in ODIs along with five other cricketers. Nicholls provided the finishing touches with his maiden ODI ton as the hosts posted their third 300-plus total in as many games

Opting to bowl, Lasith Malinga gave Sri Lanka the kind of start they were hoping for by dismissing the openers in quick succession - getting Martin Guptill off an outside edge (caught at gully) and Colin Munro off an inside edge (chopped on). The bowlers operating from the at the other, however, weren't as disciplined as the experienced pacer. Dushmantha Chameera - one of three inclusions for Sri Lanka, along with Dhananjaya de Silva and Dasun Shanaka - was a bit wayward with his lines, as was Nuwan Pradeep.

Adding to the boundaries that Munro had scored earlier, Taylor, who was reprieved early by a missed direct hit, capitalised on some loose bowling. The bowlers managed to display better discipline as the innings progressed but Williamson was quick to transfer the pressure back on them. With his calculated stroke-play and timely boundaries that didn't allow the scorecard to stagnate, Williamson brought up a 56-ball fifty. There was solid support from the other end as Taylor registered yet another fifty-plus score and was involved in his 12th century partnership with Williamson.

Things were looking a bit glum for the visitors until Lakshan Sandakan tempted Williamson into a slog-sweep to pick up his first wicket of the series. But the wicket did little to improve Sri Lanka's position as Nicholls proved an able partner for Taylor in another strong partnership that rebuilt the platform for New Zealand. While Nicholls scored most of the boundaries initially in the partnership, Taylor was quick to catch up and in the process he raised his bat for his third century in his last eight innings. A short while later, Nicholls went past the fifty mark and helped extend the partnership past 100, with New Zealand looking set for a death overs flourish.

Unlike the previous game when Malinga had only two overs left in the last 10 overs of the innings, the Sri Lanka captain had five left in his quota when he came on to bowl the 41st over in this match. However, his presence did little to affect Taylor, who dealt in sixes against Sri Lanka's experienced pacer. Having cleared the fence four times off Malinga, a fifth such attempt resulted in the dismissal of Taylor in the 47th over.

But the scoring of maximums did not cease with that dismissal as Nicholls struck one off Malinga in the penultimate over of the innings to register a 71-ball ton, followed by a six off Neesham's bat as the bowler finished with 3 for 93 from his 10 overs - his second most expensive spell. With three more fours and a six off Pradeep in the final over, Nicholls finished unbeaten in his 80-ball stay that included 12 fours and three sixes.