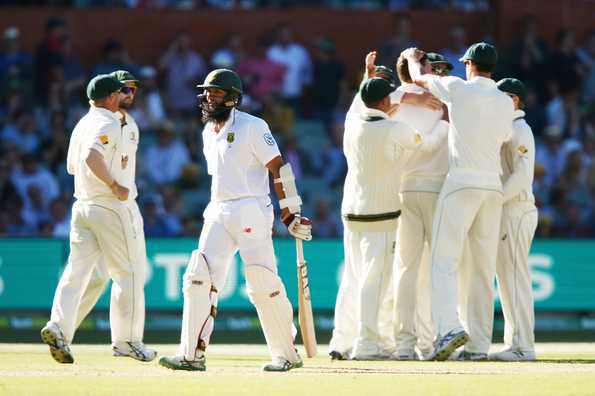 Mitchell Starc carried forward momentum from his stint with the bat that fetched him his seventh Test half-century to his bowling as he struck in the opening over of South Africa's innings to send back Dean Elgar for a duck. However, South Africa ended the second session strongly, going into Dinner 100 for 2, trailing Australia by 24 after a fine rescue act from Hashim Amla and Stephen Cook, who added 81 for the second wicket, on the third day of the day-night Test at the Adelaide Oval on Saturday (November 26).

When Dinner was taken, Cook was unbeaten on 43, joined by JP Duminy (5) in the middle.

Starc fired in an overpitched delivery that swung away very late as Elgar got an edge to it that flew towards Steve Smith at slip, who picked it up beautifully with a low catch. Starc was creating chances as the ball saw a hint of movement at the start. As soon as Amla came out to bat, Josh Hazlewood was beckoned to do the needful. Hazlewood, who had dismissed Amla four times this series, did it another time and accounted for him th most number of times any bowler has in a series. Hazlewood to Amla this series reads thus: 5 innings, 5 dismissals, 29 runs in 52 balls.

Before his dismissal, Amla and Cook saw through the initial spell of Starc and Hazlewood exercising caution up front. Slowly, but steadily, as they opened up, the runs began trickling in. Cook was his usual jittery self at the start, evidently lacking confidence, but as the session played out, his strokes became firmer and full of intent.

Just as was witnessed in Australia's innings where Starc was dismissed in the over after the drinks break, Amla provided a chance off the bowler in South Africa's innings at a similar juncture. Amla edged a full and wide delivery that bisected Matt Renshaw and Matthew Wade. Renshaw stretched full-length to his left and got a hand onto it but couldn't hold on, but it was perhaps the wicketkeeper's catch.

Either way, Amla was handed a life when on 13 and eventually frustrated the Australians as he came into his own, switching gears and going after Nathan Lyon in particular. However, his 45-run stay was put to an end Hazlewood bowled a beauty that moved away just enough to get the edge that Wade pouched straightforwardly. Amla was given out by on-field umpire Nigel Llong, but decided to review. Both HotSpot and Snicko provided evidence of an edge.

Jackson Bird created a few chances towards the end of the session with lengths and lines that bothered Duminy and Cook alike, but the pair ensured no further damage was done as South Africa fought back.