Every game important to make inroads in career: Shamsi 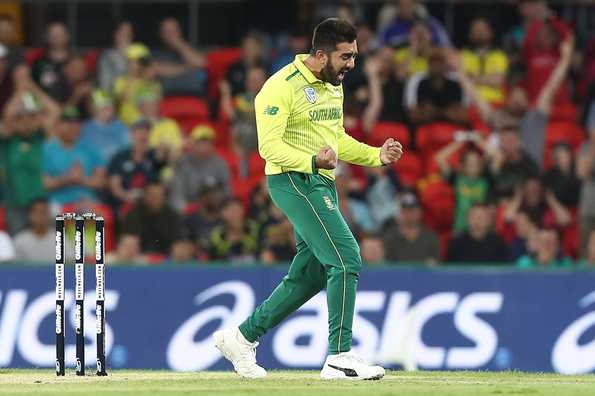 "Every game you play for your country is important. It is important for someone to make inroads in their careers or find form if you're out of form." Tabraiz Shamsi needs to look beyond no one but himself before making that statement after South Africa's signing off victory in Australia.

The left-armer has been a second-choice spinner for South Africa ever since he made his debut, having featured in only 8 ODIs 9 T20Is since January 2017. He only gets to feature if the team is playing two spinners or if Imran Tahir is rested. The case isn't any different in Tests, where he isn't at the top of the pecking order in the spin department. With Tahir being one of the best spinners in world cricket, Shamsi will need to put his best game forward in order to find a place in the starting XI of the side as the World Cup closes in.

On Saturday (November 17), he returned with figures of 1 for 12 off his two overs as Australia attempted to chase down 109 in the rain-shortened 10-over-a-side encounter in Queensland.

Even as he regularly erred in length, his tight line didn't allow the Australian batsmen to go for the big shots in the middle overs. A strangled approach only added to the misery of the hosts as the required rate rose sharply before they eventually fell 21 runs short of South Africa's total. For his brief spell in the middle overs, Shamsi was adjudged the Player of the Match in the one-off T20 encounter.

However, for the leggie, the two overs that he bowled was all that he got on the Australian tour. After being left out of the one-dayers which South Africa won 2-1, he was picked over Tahir for the T20 match. Nonetheless, he doesn't display any disappointment. "I was joking around with the guys. I'm happy to get at least two overs on this tour. (Being on the sidelines) gave me an opportunity to work on certain things."

His case was much similar to that of Chris Morris. The all-rounder, who wasn't preferred in the one-day series, got an opportunity for the last match of the tour, and backed it up with an impressive display of bowling. After getting bowled out for a duck, he returned to bag 2 for 12 from his two overs.

Coming on to bowl in the last over of the powerplay, Morris turned the game around in South Africa's favour by dismissing D'Arcy Short and Chris Lynn.

Praising Morris's efforts, Shamsi said: "He is also one of the guys who didn't get an opportunity in the one-dayers. It is a shortened series. But it has given us an opportunity to work on things that we wouldn't have had otherwise. He has done a great job sitting on the sidelines. We work as a squad. The coach and captain trust the abilities of all the guys. It was nice to see Chris put on a show."

The match, however, after struggling for relevance was under threat of being washed out. The predicted rain and storm did disturb the game and delayed the toss. However, some swift work by the ground staff enabled a truncated contest. Shamsi, nonetheless, was happy that his side could put on an entertaining show for the crowd at the Carrara Oval, which was hosting its maiden international match.

"Of course, one-off T20 is not ideal but against Australia, our guys were all pumped up," he said. "It's always nice to come to Australia. There was a nice big crowd here, (their) first game. It would have been a pity had we not got a game here.

"This T20 became a T10. It was about entertaining the people who take the time out to come and watch us play. It was a nice all-round effort. The batsmen went out there and did the job. The bowlers too did well.

"Australia is a strong team. We never ever take Australia lightly. We just focus on our game plans and what we need to work on. We're happy that we won both the series. That was our objective coming here and we can be pleased that we've achieved something," he concluded.