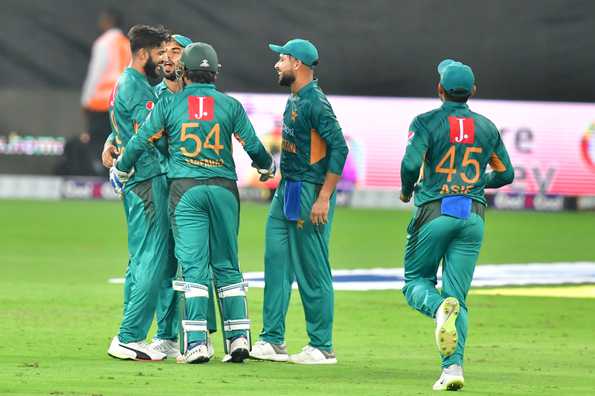 Australia ended their tour of UAE winless, after conceding the third and final T20I by 33 runs in Dubai on Sunday (October 28), whitewashed for the first time by Pakistan in any format, with the series ending 3-0. Sarfraz Ahmed is yet to lose a T20I series.

Australia gambled with opening with Alex Carey, a move which seemed like it had paid off after he milked 20 runs off the opening over off Imad Wasim, who was named Man of the Match in the first two T20Is this series. Wasim, who hadn't conceded a single boundary in the last game, had conceded four in his first over. Pakistan, for the first time in the series, found themselves under a bit of pressure as the Australian batsmen found the boundaries regularly, muscling their way through, upfront.

With Australia taking on the offspinners, it was up to the legspinner Shadab Khan to pull the breaks on Australia. He struck first ball getting Lynn, who was offered a chance by Hasan Ali when he was put down in the previous over. A slog sweep soon after did him in with Shadab picking up his first of three wickets on the night, finishing with figures of 3 for 19.

Ben McDermott's third successive run-out, when he was steadying the innings, didn't do Australia any good. Nor did D'Arcy Short's pull off Usman Khan that was taken beautifully in the deep by Shoaib Malik. Pakistan didn't hold on to all their catches, but the Australian batsmen ensured they didn't give the opposition too much to fret over. With the side being reduced to 106 for 8, and 45 needed from the last three, Australia had left too much for their bowlers to do.

Once the openers fell in quick succession, it was a matter of the Australians throwing their wickets away in the attempt to muscle everything to the boundary, forgetting the basics. They failed to dig in, rotate the strike and form any semblance of a substantial partnership. And regular wickets didn't help their cause as they switched to self-destruct mode.

Nathan Lyon, who was playing his first T20I in two years, started strong, but an extra over, his third on the trot upfront after opening the bowling, saw Babar Azam attacking the offspiner. Nathan Coulter-Nile, who was getting the ball to swing and hitting the right lengths, keeping the batsmen tied down. But the over that he experimented, he went for 15 runs, before Azam used his feet well against Lyon and took him for 15 as well, with Pakistan racing away to 54/0 in the powerplay.

Babar continued his rich vein of form by getting to a fifth half-century in six innings in the format, while sharing a 93-run stand with Sahibzada Farhan, who was only playing his second T20I. The pair used their feet well against the spinners on a slow pitch on which the ball began holding up, before they fell in successive overs.

After Lyon had Farhan (39) caught at long on, Babar (50) played on to a legcutter from Andrew Tye. Shoaib Malik and Mohammad Hafeez chipped in with handy scores, but Australia did well to hold on to the chances offered with Adam Zampa and D'Arcy Short forcing proceedings under control with tight spells, beating the batsmen in the air with their flight with the pair conceding under seven an over in their quota.

Mitchell Marsh's double strike in the penultimate, and his only over, meant Pakistan couldn't get away with runs towards the end, scoring just 39 in their last five, with only 11 of those coming in the last two. Hafeez remained unbeaten on 32 off 20, giving Pakistan vital runs in the end.