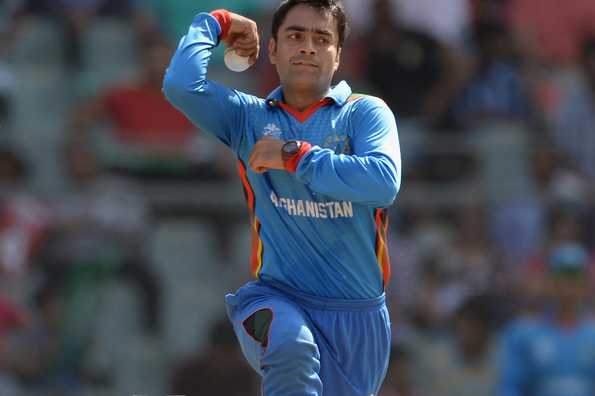 An all-round show from Afghanistan helped them complete a comprehensive six-wicket victory over Zimbabwe to take a 2-1 series lead in the five-match ODI series, at Sharjah Cricket Association Stadium on Tuesday (February 13). Rashid Khan and Mujeeb Zadran picked eight wickets between them to bowl out Zimbabwe for just 154, after which fifties from Rahmat Shah and Nasir Jamal ensured smooth sailings in chase.

Mohammad Shahzad couldn't make the most of his opportunity after having returned from his ban recently, as Zimbabwe bowlers began in optimistic fashion, only for an in-form Rahmat and Jamal end it all too soon with a 69-run match-winning partnership. They both scored half-centuries and were then dismissed, but Afghanistan saw off the chase in just the 28th over with six wickets to spare.

Earlier in the day, Rashid Khan showed why he continues to be one of the biggest assets in limited-overs cricket currently, as he bagged a five-fer. Another young spinner from Afghanistan, Mujeeb, complemented Rashid with a three-wicket haul. The duo bamboozled the Zimbabwe batsmen, who scored 333 in the previous fixture. The only form of resistance in the third ODI, however, came from Craig Ervine (39) and Sikandar Raza (38), but that wasn't enough to arrest the slide.

Zimbabwe's collapse began with the fall of Brendan Taylor - who smashed a 121-ball 125 in just the previous fixture. On this occasion however, Taylor was sent packing for just nine runs, in the eighth over by Mujeeb. Solomon Mire was dismissed in the same over, after which the partnership between Ervine and Raza kicked in, until Rashid entered the scene to ruin any plans of another big total. Rashid had Raza and Ryan Burl off successive balls to reduce Zimbabwe to 117 for 5 in the 23rd over.

Malcolm Waller and Craig Ervine departed for the addition of just nine more runs to the total. Captain Graeme Cremer too fell cheaply, before Tendai Chatara and Brian Vitori chipped in with a few runs. Rashid though, ended both their time in the middle, across two overs to complete his five-wicket haul and end Zimbabwe's essay.

Zimbabwe will go into the fourth fixture - on February 16 - with the arduous task of trying to deny Afghanistan a series victory and stay alive in the competition.