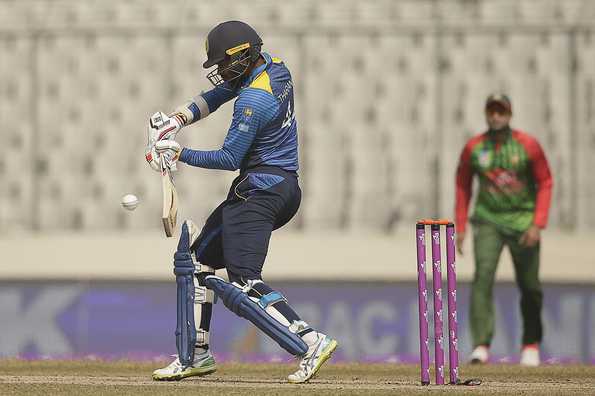 Sri Lankan skipper Dinesh Chandimal said that trusting their new head coach Chandika Hathurusinghe paid dividends as it resulted in the team turning things around to clinch the tri-series in Bangladesh. Sri Lanka were in dire straits before entering the tournament and began it in disastrous fashion before completing a remarkable turnaround.

Hathurusinghe was the only new introduction in the Sri Lankan dressing room as he joined the Sri Lankan setup after relinquishing his post as Bangladesh's head coach. "We all know he is a really good coach. He gave us more confidence, to everyone. That's the main thing," said Chandimal after the win on Saturday (January 27).

"If you can trust your coach, good results will come. That's what he did. This is all about hard work from the players and the coach," he pointed out.

"He is the one who brought the team here, so credit goes to him also. It was a really happy moment to us. This is what we wanted, winning the series, so we grabbed the opportunity with both hands. We are over the moon. This is all about hard work, especially after you lose the first two games, it is difficult to get back in this kind of tournament.

The skipper also credited Upul Tharanga and Niroshan Dickwella for their partnership which he believes changed the complexion of the game considering it was a difficult wicket to bat on.

"It was tough. I prayed before the toss, I need to win the toss. It was a dry wicket. Credit goes to Upul and Dickwella, they put on a 70-run partnership. That was a turning point," he said.

"We knew after 20 overs that if we can get 220-230, that's a winning total for us. Credit goes to Upul and Dickwella, they played some outstanding cricket."

Chandimal added that despite scoring a not so impressive total they were confident of winning as they believed they had some surprise to offer the hosts. It came in the form of right-arm pacer Shehan Madushanka who became the fourth bowler in history to claim a hat-trick on debut as Sri Lanka crushed Bangladesh by 79 runs.

Madushanka claimed Bangladesh's last three wickets as he finished with 3-26 to help Sri Lanka bowl out the Tigers for 142 runs in 41.1 overs after they were restricted to 221 runs.

"We all knew, as I said, they are really good, especially playing here," Chandimal noted.

"But we had a feeling that we have a good total, and that's a winning total. As I said we have game plans and we always try to play competitive cricket. And the guys played some outstanding cricket all around - with bat, ball and on the field."