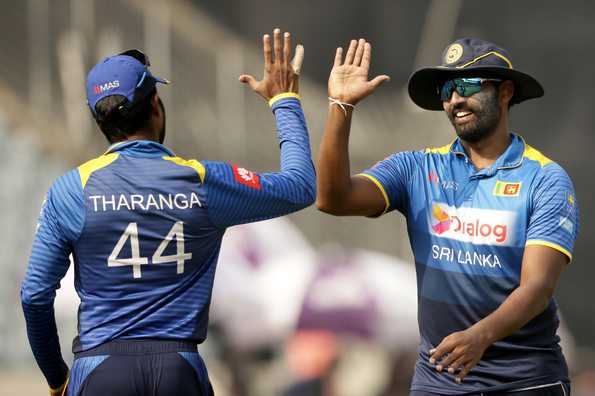 Sport is a microcosm of life, as athletes dream and aspire to reach the pinnacle of success . However, the path towards fame and fulfillment isn't an easy one. The young Sri Lankan cricket team will testify that. They were thumped across formats by a formidable Indian side in 2017 and started the tri-series in Bangladesh also involving Zimbabwe with a couple of losses.

It seemed like there was no light at the end of a never-ending tunnel of darkness. But, they persevered and bounced back in fine style to not just qualify for the final but defeat the form team of the tournament, Bangladesh, by 79 runs in the final to lift the title. Upul Tharanga (56), Dinesh Chandimal (45) and Niroshan Dickwella (42) all made vital contributions. On the other hand, Shehan Madushanka, the promising pacer, bagged the last three wickets to fall to pick up a hat-trick on his ODI debut and cap off a memorable day for the island nation.

Sri Lanka close in on title

Oh, some drama there.Mortaza hit a full toss to mid-wicket. but did the debutant Madushanka overstepped? It turned out to be close. On replays, it felt as if just a hint of his right leg was behind the crease and Mortaza was given out. Mahmudullah running out of partners.

Madushanka then castled Rubel and now he is on a hat-trick. The visitors just one wicket away from registering a memorable win and hoisting the title. What a comeback from the island nation!

Mahmudullah is playing a composed hand and fighting hard for Bangladesh. He even charged down the track to smack Lakmal for a six. However, just in the nick of time, Sri Lanka picked Saifuddin's scalp.

It was a horrible mix-up. Saifuddin nudged the ball straight to short mid-wicket, was never a run there. But he took a few steps out of the crease initially which set Mahmudullah on his way - to the point of no return. Gunaratne kept his cool, knows that he could run to the stumps and take them out and does so. The youngster did the right thing by sacrificing his wicket.

Breaking- Shakib has been ruled out of the first Test versus Sri Lanka due to a hand injury that he suffered earlier in the day. And he won't bat in this crucial final either.

It is Dananjaya in the thick of things again, dismisses Mehidy Hasan with the off-break. Soft dismissal as he pushed one back to Dananjaya. Bangladesh - 90 for 5.

Rahim seemed to be trying one shot too many. He looked for a reverse sweep and then swept Dananjaya straight to Tharanga at short fine leg. Dananjaya is ecstatic. Chandimal had a few words to day during the drinks break, it seems to have motivated the Sri Lankan side.

Rahim and Mahumdullah played with a sense of responsibility on a sluggish surface to compile a crucial fifty-run stand. Rahim, though, had a close shave as he was given out LBW off Dananjaya, only for the 'keeper-batsman to review and replays showed it pitched outside leg.

Sabbir Rahman, known for his aggressive batting, is trudging back to the pavilion... 22 for 3. Sabbir just pulled one to Gunaratne at mid-on who snaffled a sharp catch

Thisara Perera didn't impress with the bat today but has now effected a direct-hit from mid-on to run out Mithun. Bangladesh are 17 for 2, in some trouble.

Chameera has fluffed a chance off his own bowling. He got both his hands onto it but couldn't pouch it. Tamim with the reprieve.

Chandimal held the innings together in the slog overs while Dananjaya cracked a couple of lusty blows as Sri Lanka ended up with a useful total of 221 on a tricky surface. Rubel bowled full and straight and mixed it with variations to pick up a four-fer.

With doubts over whether Shakib will bat, this could turn out to be a tough chase on a surface that is gripping.

We have news coming in that Shakib has gone to hospital for an x-ray and won't take part in the rest of the match.

While trying to run out Chandimal, the bedrock of Bangladesh, Shakib, has injured his bowling hand. This could be bad news for the Tigers. He is walking back to the pavilion.

Thisara has been in good form in the tri-series so far, but he mistimed his flat-batted slog as Tamim pouched the catch. Big wicket for Rubel and Bangladesh.

Tharanga compiled a fine hand of 56, but Mustafizur's off-cutter proved to be too much for the southpaw batsman as he castled the left-hander. Bangladesh keep chipping away...

Oh, Dickwella has thrown it away. After stringing together a vital stand with Tharanga, he eked out a leading edge to Sabbir Rahman at point off Saifuddin. Soft dismissal.

Dickwella and Tharanga continued to mix caution with aggression. Dickwella even took Sri Lanka past the 100-run mark in style by lifting Saifuddin over mid-on for a boundary.

For Bangladesh, Rahim dropped a rather tough chance as Tharanga got a reprieve.

Dickwella then took a review after he was given out LBW off Mehidy. To the naked eye, seemed like an inside edge and replays confirm the same. Dickwella immediately took the review and that was a give away.

Mustafizur and Bangladesh took a review for LBW against Tharanga but the angle seemed to be taking it down leg. The ball-tracker confirms it. Poor review, I must say.

Dickwella tried to scoop Mortaza but missed and was hit on the ribs. He seemed to be in some pain for a while as the physio came out. Fortunately, he looks better now as he decides to continue with his innings.

Oh, Mendis has thrown it away. After playing a slew of shots, he got carried away as he pulled one straight to mid-on off Mortaza. He would be disappointed as he looked in wonderful touch. Mortaza is pumped up though.

Kusal Mendis is on fire! he used the depth of the crease to pull and loft Mehidy for three sixes and a four, as Sri Lanka collected 24 in an over. Sri Lanka are up and away after a tentative start.

Bangladesh on the money

Good start for Bangladesh. Mehidy Hasan, the off-spinner, has dislodged Gunathilaka in the third over. Mehidy is a useful bowler with the new ball, especially with his arm delivery.

Sri Lanka have won the toss and opted to bat. Maybe they want to put up a good score on the board in a final.

Meanwhile, you can also catch all the action related to the eagerly anticipatedIPL Auction.

After losing their first two games, Sri Lanka have bounced back strongly to progress to the final of the tri-series versus Bangladesh. Thisara Perera's heroics ensured a hard-fought win against Zimbabwe, while in the Bangladesh-Sri Lanka match, the bowlers were superb and the island nation roared to the final by chasing down the target in just 11.5 overs. It also turned out to be Bangladesh's heaviest defeat against Sri Lanka in terms of balls left.

Sri Lanka have the momentum going into the final. The Mortaza-led Bangladesh side, who were on a roll, after winning three straight matches, now will aim to put behind the embarrassing loss in the all-important final.

Toss and teams in a while...