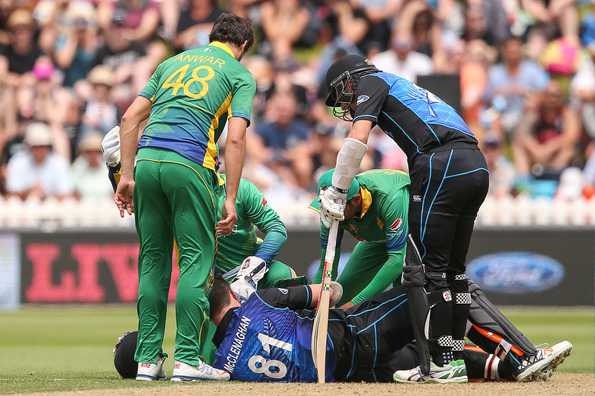 Mitchell McClenaghan, the New Zealand pacer, is set to miss the remaining matches of the One-Day International series against Pakistan after suffering a fracture to his left eye socket in the first ODI at the Basin Reserve in Wellington on Monday (January 25).

The New Zealand fast bowler will need surgery after being struck by an Anwar Ali bouncer that went through the grill of the helmet and hit his eye. The incident took place in the 50th over of the first innings and McClenaghan had to retire on 31.

A New Zealand Cricket (NZC) spokesman said that the x-ray revealed a small fracture above the fast bowler's left eye, as reported by stuff.co.nz. McClenaghan will undergo a 'minor cosmetic surgery' in Auckland on Friday. While the injury is likely to rule McClenaghan out of the final two games of the series, he isn't expected to be sidelined for too long.

As per reports, he should be available for selection for the upcoming Chappell-Hadlee series against Australia, starting on February 3.

Despite missing McClenaghan's bowling services, Grant Elliott and Trent Boult picked up seven wickets amongst themselves to bowl the hosts to a 70-run win, defending 280.

Thanking fans for their concern after the ordeal, McClenaghan wrote on Twitter, "Everything is as good as it can be just a few broken bones. Great win for the boys!"