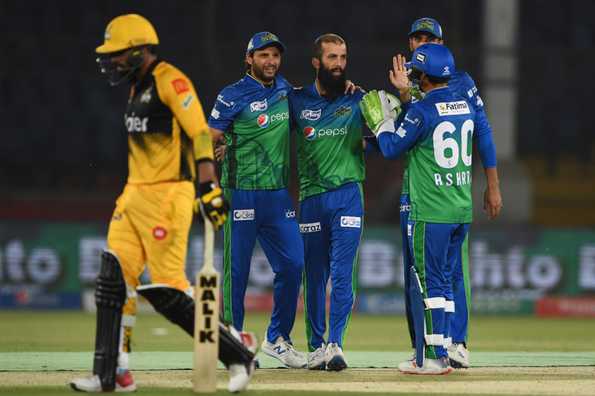 Imam ul Haq's half-century went in vain as Multan Sultans beat Peshawar Zalmi by three runs to strengthen their position at the top of the points table. Needing 15 runs from the final over, Zalmi brought down the equation to four off the final delivery but couldn't get over the line.

Chasing 155 for a win, Imam stitched useful partnerships in the company of Umar Amin (29) and Shoaib Malik (30) en route to his 41-ball 56, after Kamran Akmal and Wahab Riaz fell early. However, after his dismissal, three more wickets fell in quick succession, triggered by Sohail Tanvir and Ali Shafiq, and Zalmi were reduced from 126 for 3 to 140 for 7, putting the onus on No 8 and No 9 batters to get them over the line in the final over.

Earlier in the day, Zeeshan Ashraf's 39-ball 52 helped Multan Sultans to 152 for 6 after they were put in to bat. He put on a 60-run stand for the second wicket in company of Shan Masood, before a mini-collapse was triggered by Rahat Ali. Multan slipped from 92 for 1 to 105 for 5. The innings was also aided by useful contributions from Shan Masood (23-ball 28) and Khushdil Shah (20-ball 30*). Rahat Ali was the pick of the bowlers for Peshawar Zalmi, returning figures of 3 for 24.