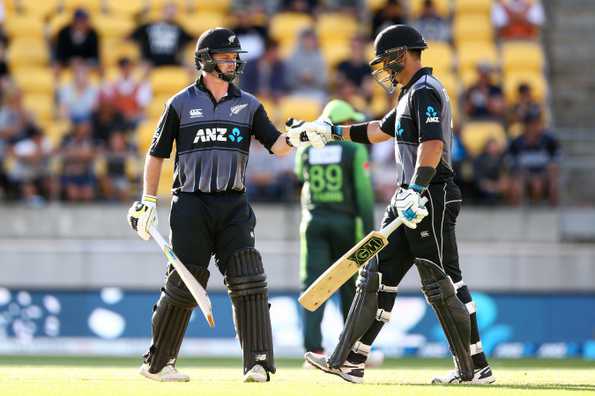 Tim Southee, Seth Rance and Mitchell Santner starred with the ball, picking up eight wickets between them before Colin Munro struck an unbeaten 49 to help New Zealand secure a seven-wicket victory in the first Twenty20 International against Pakistan at the Westpac Stadium in Wellington on Monday (January 22). It was another dismal batting performance from Pakistan that resulted in them being bowled out for 105. In reply, Munro guided New Zealand in the chase, playing the unfamiliar role of an anchor to help the hosts over the line in the 16th over, securing a 1-0 lead in the three-match series.

On a two-paced wicket with some balls keeping low and some rising off a length, Pakistan's batsmen were guilty of poor shot selection earlier. Martin Guptill too committed the same error, attempting a heave against a delivery that wasn't in his zone, causing his downfall. Mohammad Amir and Rumman Raees did well to cramp Glenn Phillips for room with short of length deliveries while keeping Munro off strike. The quiet period eventually led to the dismissal of Phillips as he tried to cut a Raees delivery that was too close and chopped it on. Tom Bruce managed a couple of boundaries off Raees but it was a muffled powerplay for New Zealand otherwise as they managed only 28 and Munro ended up being struck on his thumb by a throw, although he was up and running after some attention from the physio.

On a wicket that wasn't ideal for the batsmen, it was imperative to display better application with the bat and New Zealand did well to learn from Pakistan's mistakes as Munro and Bruce were happy to play the ball on merit. Munro did have a couple of nervous moments - he survived a review because of extra bounce after a failed reverse sweep off Shadab Khan and then a well-timed sweep landed just short of Umar Amin, who was late to get to the ball - but his approach, and that of Bruce, was disciplined. Their wait-and-watch method bore fruit as they were able to gauge the nature of the pitch as their partnership progressed and play their shots a lot more confidently. But Bruce, who struck Shadab Khan for a six and a four in the ninth over, got a bit carried away in his attempt target the legspinner and holed out at deep mid-wicket which ended a 49-run stand.

Munro, meanwhile, continued in a meticulous manner, rotating the strike well and cashing in on boundary opportunities. The introduction of left-arm spinner Mohammad Nawaz helped the opening batsman free his arms as he struck a four and a six off consecutive deliveries. That he was able to pull Raees for a six despite the ball not being all that short spoke of his astute understanding of the track and the ability to shift gears seamlessly. But Munro narrowly missed out on his fourth successive fifty-plus score in T20Is as Ross Taylor struck three consecutive boundaries off Hasan Ali in the 16th over and with one required, the bowler bowled a short delivery which was too high and was deemed a wide, leaving Munro stranded on 49 as New Zealand romped home to a comfortable victory.

Earlier, after New Zealand opted to bowl, Rance relished the bounce and troubled Umar Amin in the opening over. Southee, who was leading New Zealand after Kane Williamson was rested due to a side niggle, also had Fakhar Zaman in a spot with short deliveries before bowling one fuller to have him caught at cover. Southee could have picked up another but for Taylor, who dropped a regulation take at slip to give Nawaz a reprieve. But a wicket fell soon after as Amin top-edged a Rance delivery to depart without scoring. The injudicious shots resulted in two more wickets as Nawaz and Haris Sohail departed after their failed bids to go over the top, leaving Pakistan reeling at 24 for 4 at the end of the powerplay.

Babar Azam and Sarfraz Ahmed went into damage control mode while New Zealand operated with Ish Sodhi and Mitchell Santner in tandem. The No. 1 ranked T20I bowler troubled Sarfraz, who was struggling to figure out which way the ball was turning. But it was Santner who eventually accounted for the wicket of Sarfraz as the Pakistan captain lost his balance while attempting a sweep and was out stumped. Shadab followed the very next delivery, edging Santner to the 'keeper as Pakistan's woes with the bat continued.

Azam and Faheem Ashraf kept the bowlers at bay for a while before Southee returned to bag his third wicket - a short delivery cutting short Ashraf's stay. Azam continued to anchor the innings, which wasn't going anywhere until Hasan scored a huge six off Sodhi over the mid-wicket region and followed it up with two back-to-back maximums off Rance. Hasan fell in his endeavour to attempt a third off Rance and the bowler went on to dismiss Amir to finish with career-best figures of 3 for 26. It wasn't until the final over that Azam attempted the big hits, managing a four and a six off Munro before becoming the last to depart.