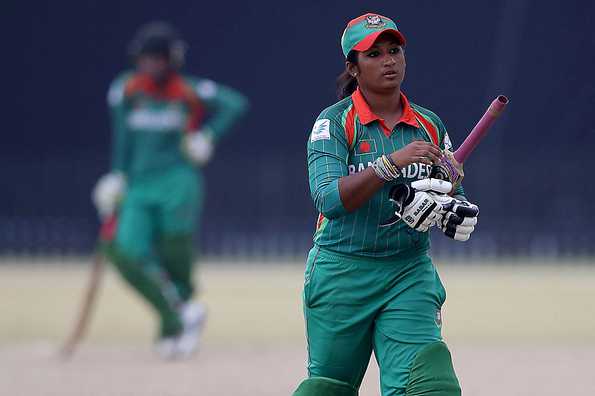 Jahanara Alam's five-wicket haul and fine knocks from Nigar Sultana and Fahima Khatun helped Bangladesh Women defeat Ireland by four wickets at the YMCA Cricket Club in Dublin on Thursday (June 28) to take a 1-0 lead in the three-match T20I series. Chasing 135 for victory, Sultana (46) and Fahima (26 not out) helped Bangladesh over the line, although it involved a bit of drama towards the end. With four needed in the final over, it boiled down to the last ball when Fahima took a single to seal a close win.

After the wicket of Shamima Sultana early in the chase, Ayasha Rahman and Fargana Hoque were involved in a 34-run partnership. Ayasha scored the bulk of the runs in the second wicket stand while her partner was struggling with her scoring rate. While Bangladesh managed 36 in the powerplay, things slowed down for them as Fargana was not able to find the boundaries and coupled with the run out of Ayasha, the visitors could only put up 49 at the halfway stage of the innings.

Sultana provided the impetus by scoring three fours off Lara Maritz in the 12th over and she managed a few more hits to the fence even as Ireland chipped away at the other end as Gaby Lewis dismissed Fargana for a 25-ball 13 before trapping Rumana Ahmed in front. The arrival of Fahima to the crease gave the support that Sultana was hoping for as they scored four boundaries between them in a crucial partnership.

With 18 needed off the last two overs, Fahima and Sanjida Islam managed to hit a boundary apiece off Isobel Joyce to ease the nerves in the Bangladesh camp. There were some nervous moments in the final over as Eimear Richardson conceded three runs off five deliveries which included the run out of Sanjida off the penultimate ball. But Fahima's calm presence ensured a fourth victory on the trot for Bangladesh.

Earlier, asked to bat, Ireland suffered early setbacks as Jahanara removed openers Clare Shillington and Cecelia Joyce in successive overs. A brisk 28 from Gaby Lewis helped Ireland get a move on and following her dismissal, Isobel Joyce and Laura Delany put on a promising partnership to keep the scoreboard moving.

Having crossed the 100-run mark in the 16th over, Ireland lost wickets in a heap in the death, although they did manage a few boundaries to push the total past 130, collecting 29 runs in the last four overs.