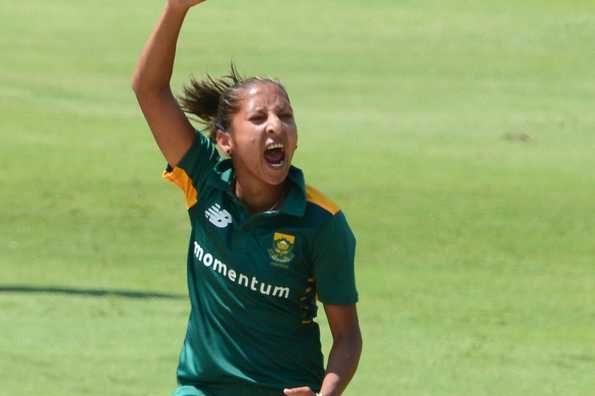 South Africa Women kept the Twenty20 International series alive after picking up a vital five-wicket win - their first-ever against India in the format - in the third game in Johannesburg on Sunday (February 18). India looked set for a huge total which would have put them on course for their third straight win but Shabnim Ismail wrecked the middle order to keep the visitors to 133. The target was chased down with an over to spare following Chloe Tryon's rapid cameo.

India were rocked very early in their innings with Mithali Raj departing for a five-ball duck. They recovered quickly with Smriti Mandhana smashing four boundaries off her first four deliveries. The left-hander rounded off the powerplay in style with a boundary and a six off Tryon but South African skipper Dane van Niekerk brought herself into the attack to get rid of the free-flowing Mandhana. Harmanpreet Kaur then took on the mantle of the aggressor after Mandhana's departure. The skipper first hit her counterpart for a six straight down the ground and then took on Raisibe Ntozakhe in the following over to plunder 18 runs, that included three successive fours.

At this stage, India were well placed at 91 for 2 after 11 overs and looked to be on course to post at least 160. Ismail then turned the game on its head by nicking both Harmanpreet and Jemimah Rodrigues in the same over in the space of three balls. The seamer also sent back Anuja Patil in her following over to leave India reeling at 109 for 5 after 14 overs. Veda Krishnamurthy appeared to revive the innings by fetching three boundaries in the space of five deliveries but with Moseline Daniels castling her in the 16th over, India's tail crumbled to get bowled out for 133 as they failed to bat out their quota.

A moderate target of 134 provided the hosts a massive chance to pull one back in the series. Even though India managed to remove both the openers inside the powerplay, Sune Luus and Mignon du Preez batted with caution to ensure the side didn't suffer a collapse similar to India's. The duo added exactly 50 for the third wicket before Poonam Yadav sent du Preez, who had just received a reprieve earlier, back to the pavilion with no major damage done.

The wicket perhaps came at the right time for the hosts as it brought out the big-hitting Tryon out to the middle. Needing 43 off the final five overs, Tryon made the target look easy. Having already smashed an unbeaten 32 off just seven deliveries in the series opener, Tryon took on Anuja in the 16th over, hitting a six, followed by a couple of fours and then almost sealed the chase at the start of the penultimate over by smashing the same bowler for another four and a six. She was stumped off the very next ball while attempting to finish the game with a bang but her mates polished off the chase anyway in the next three deliveries.