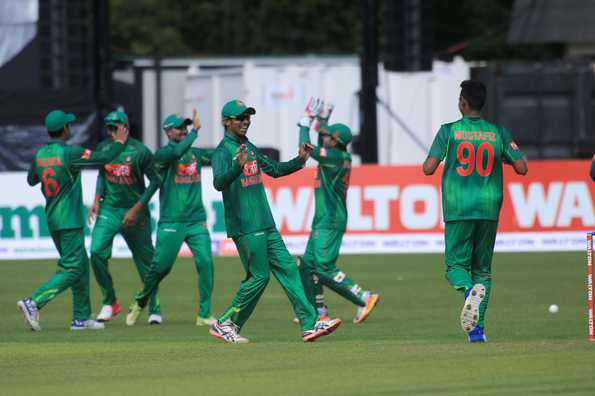 If there is a textbook on how to throw away good starts, Ireland followed it to the T, thus ending up with a below-par total after being asked to bat first in the fourth match of the ODI tri-series at The Village, Dublin on Friday (May 19). Five of the top-six reached double digits but none managed to convert their promising starts into a substantial contribution - Ed Joyce's 46 being the highest - to be bundled out 181 for in 47th over. Mustafizur bagged a four-wicket haul while debutant Sunzamul Islam - another from the line of Bangladesh's left-arm spin factory - and skipper Mashrafe Mortaza picked up two apiece.

With plenty of bounce and movement on offer on a greenish track, the Bangladesh new-ball bowlers made good use of it to test the batsmen. It was bounce that aided Mustafizur in dismissing Paul Stirling for a duck in the second over, with the batsmen edging to the fielder at gully. Following two maidens at the start of the innings, William Porterfield and Joyce, who had replaced Simi Singh, tried to steer Ireland forward with a steady partnership.

The second wicket pair capitalised on anything that was strayed down the leg-side and the Ireland skipper grew in confidence as the stand progressed, coming up with a flurry of boundaries. Rubel Hossain bore the brunt of his attack while Mortaza ended up being hit for the first six of the day. Poor catching added to his woes as Mosaddek Hossain put down a dolly at short cover. The reprieve, however, did not prove costly as Mosaddek made amends by holding on to the ball when Porterfield chipped one back at him.

A useful partnership between Joyce and Andy Balbirnie led the team's recovery as they mixed caution with aggression to start laying the groundwork for Ireland's innings to take off. However, another wicket fell against the run of play as Shakib found the gap between Balbirnie's bat and pad to perfection. After the assistance for the quicker bowlers, it appeared the pitch had changed in nature as it was gripping a bit and not coming on to the bat unlike before.

Meanwhile, Bangladesh's catching woes continued as Mushfiqur Rahim put down Niall O'Brien twice, who ensured the visiting side paid for it. Taking on the spinners, even as Joyce held firm at his end, Niall upped the ante to bring up a half-century stand. Just when they were setting up the platform, Ireland lost another wicket, with Niall finding Tamim Iqbal at third-man. Soon after that, Joyce too was guilty of throwing away a good start, failing in his attempt to take on debutant Sunzamul, who picked up a wicket in his first over to leave Ireland five down for only 126.

Things turned from bad to worse for Ireland as Kevin O'Brien and Gary Wilson departed in quick succession, both picked up by Mustafizur. Kevin was another batsman who entered double figures, but having reached 10, his execution of a drive went awry as he sliced to sweeper cover where Mosaddek ran, dived forward and held on to a superb take inches off the ground. The Bangladesh left-arm pacer claimed his fourth by dismissing Wilson, who was ruled caught behind despite replays suggesting that the ball had come off his thigh.

A spirited rearguard act between George Dockrell and Barry McCarthy stemmed the rot for a while. The eighth wicket pair showed better application than most of the top-order batsmen as they tried to take Ireland towards a total of some respectability. They added 35 runs before things fell apart for the home side in death overs. McCarthy failed in his attempt to sweep Sunzamul to be trapped in front while Dockrell and Peter Chase fell to Mortaza, both edging to the keeper, as Ireland fell well short of the 200-run mark, bowled out with 3.3 overs still remaining in their innings.