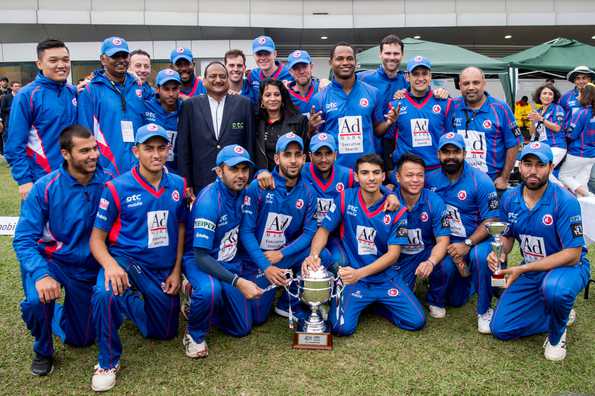 Babar Hayat chose the perfect occasion - the Hong Kong T20 Blitz Final against City Kaitak - to showcase his skills of leading by example, as he smashed a 40-ball 76 to lay the foundation for his team's title victory at Mission Road Ground. Dwayne Smith, who left Hong Kong crowd to pick up their jaws off the floor just four days ago by smashing a 31-ball 100, decided to match his captain and torment the bowlers once again.

Together, Hayat and Smith put on 149 runs for the first wicket off just 77 deliveries. Hayat missed the chance of becoming just the second Hong Kong international to score a century in the season by only 24 runs, as he reverse swept a delivery from Nadeem Ahmed onto the stumps. His superlative knock, however, wasn't short of entertainment - including nine fours and four sixes. Just 12 balls after Hayat's exit, Smith fell as well, for a 43-ball 68, laced with four fours and five sixes.

Kyle Coetzer took a leaf out of Hayat's book to keep Kaitak in the game and the opposition on their toes. "220 is not easy to chase in a final so it was a good total. There was nerves when Coetzer was going well," Hayat said after the game. But the lack of support from the other end became a stumbling block in the chase. Tillakaratne Dilshan (23 off 11) and Nicholas Pooran (28 off 15) offered some support, albeit only briefly as Zaidi and Samuels got the better of both.

A middle-order collapse ensued, putting Kaitak behind the eight ball in the steep chase. No. 8 batsman Ryan Buckley revived his team's fortunes with a quickfire 37, but that wasn't enough as Kaitak fell 25 runs short of the target.