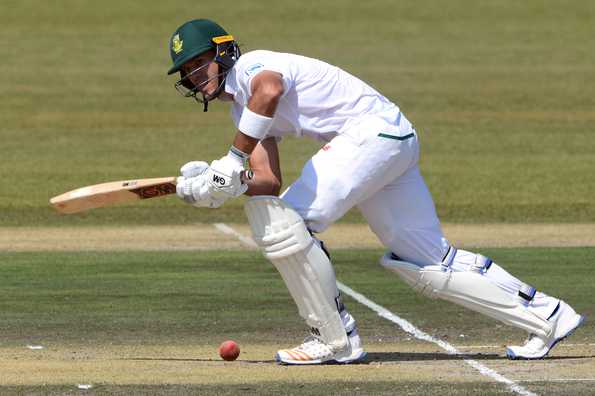 Aiden Markram's twin fifties and twenty-one-year-old fast bowler Lungisani Ngidi's superlative performace across two innings helped Titans beat Lions at home in Johannesburg to record what was the first result of the ongoing Sunfoil Series. In a game dominated by bowlers, Ngidi emerged as the best - picking a total of nine wickets.

Lions captain Stephen Cook's decision to bat first backfired almost immediately on Day 1, as he departed for a four-ball duck. Rest of the line-up didn't do justice to Cook's call either, with as many as nine batsmen returning to pavilion with single-digit scores. From 49 for 5, Omphile Ramela and Bjorn Fortuin led a resurgence with a 100-run partnership. The duo's contributions pushed Lions' total to 180.

Markram led his side's riposte with a steady knock of 85, laced with 16 boundaries. The next big contribution came from No. 7 Shaun von Berg as seven of their batsmen too finished with single-digit score. Yet, Titans managed to gain a slender first-innings lead, finishing at 213.

Cook failed in the second innings as well and Lions' batting improved only marginally as Titans bowlers were on the mark once again. Ngidi followed up his six-wicket haul in the first-innings with three scalps in the second, helping his side dismantle Lions for 165.

Besides the result-producing Lions vs Titans fixture, the fifth round of the Sunfoil series will be remembered for Vernon Philander's stirring return to competitive cricket. Playing his first first class game since July after a back injury sustained on the England tour, the Cobras all-rounder shone with both bat and ball. After the hosts opted to field, Philander picked up 4 for 25 from 20 measly overs. The star with the bat in the first innings for the visiting Dolphins side was Dane Vilas, who struck at over 80 in a 200-ball 161, helping his side post 327 despite having been four down for 100.

Cobras responded with 429 with Zubayr Hamza scored 88 while Philander showed off his versatility with the bat, scoring a crucial 80. Calvin Savage picked up a four-fer for the visitors, who then saw through to the end of the game with a power-packed second-innings where both Morne van Wyk and Vaughn van Jaarsveld reeled off quick centuries. Cobras and Dolphins stay fourth and fifth on the points table with 64 and 62 points respectively.

Only 61 overs were bowled on the final day as the encounter between Knights and Warriors at the Diamond Oval in Kimberley ended in a draw. A game that had already lost an entire day due to wet outfield was destined for a draw going into the final day. Knights, who had made 168 for 1 at stumps on third day, started off in fine fashion with opener Grant Mokoena completing his century. He didn't last long though after reaching his landmark, as a run out ended his stay at the crease. Skipper Theunis de Bruyn was the next to depart for 25 after he added 60 for the third wicket to further reduce the deficit.

Keegan Petersen then went on to reach his century before Ryan McLaren had a hit out in the middle making a quickfire unbeaten 36 that helped his side take the first innings lead before the teams settled for a draw. Earlier, Warriors had posted 362 on the board with more than 50 percent of the runs coming from the bat of Colin Ackermann, who remained unbeaten on 187.

He found support from Lesiba Ngoepe, who contributed with 52, but the rest of the batting unit failed to support the No.3 batsman. McLaren finished with a five-wicket haul after ripping through Warriors's lower middle order.