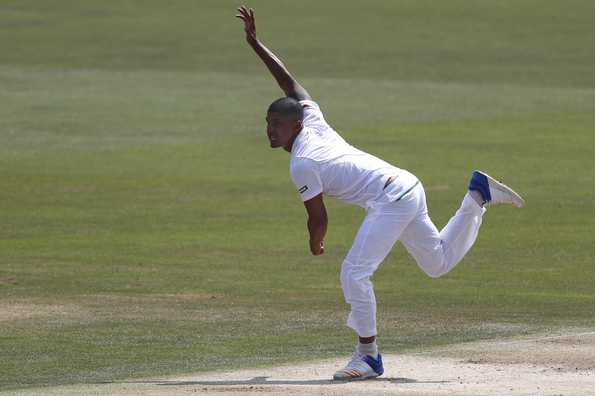 South Africa A ended the second day's play on a high, largely because of a spirited show from Beuran Hendricks and Dane Piedt, who picked up three wickets apiece to leave India A in shambles. Having bagged a lead of 292 runs, the hosts find themselves in an authoritative spot to push for a win with a couple of days still to go in Pretoria.

Resuming on 270 for 4 on the second day, South Africa lost both their overnight batsmen, Hendricks and Khaya Zondo, along with Andile Phehlukwayo on the score of 306 inside the first hour of play. While Hendricks and Zondo ran themselves out, Phehlukwayo was removed by left-arm spinner Shahbaz Nadeem, who picked up his third wicket of the innings.

Wicketkeeper-batsman Heinrich Klaasen did well to bide his time at the crease and added 29 runs which included five boundaries, helping the hosts to 346 before India A polished off the tail without much trouble. Mohammed Siraj and Nadeem ended with four wickets apiece.

India A's reply was apologetic as both openers Ravikumar Samarth and Ishan Kishan fell in the opening over to let the hosts barge in early. Middle-order mainstays Shreyas Iyer and Sudip Chatterjee departed with the score reading 37, and Ankit Bawne followed them back soon after. As Iyer employed his usual attacking approach to race away to a 31-ball 32, Hendricks caught him off his own bowling to pull the curtains down on a counterattacking knock.

Skipper Karun Nair couldn't hold his end for too long as the visitors were reduced to 74 for 6 in just over 20 overs of play. Vijay Shankar and Nadeem were in the middle of a steady partnership before the Tamil Nadu batsman had to retire hurt. The wheels came off completely as South Africa A managed to bowl their opponents out for just 120 on the board.

With a first-innings lead of 226 runs, South Africa A decided to bat again and their openers Stephen Cook and Aiden Markram put together their second fifty-plus partnership of the game. With Cook and Markram unbeaten on 32 and 34 respectively, South Africa A would look to set a target in excess of 400 before exposing the diffident India batting line-up again.