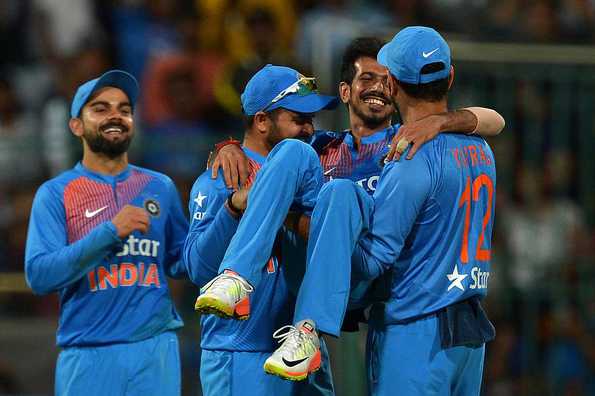 It was a fitting parting gift. It was everything England were reminded about heading into the subcontinent as all their travails were encapsulated in an eight-over spell where Yuzuvendra Chahal and Amit Mishra ensured England went home empty-handed with a majestic display of spin bowling. If Mishra applied the squeeze with his miserly spell (1-23), Chahal ripped the heart out of England's chase of 203 in a stunning second spell, finishing with the third best figures in T20I history of 6 for 25 as India completed a hat-trick of series wins against their visitors, dominating with both bat and ball in a 75-run victory at the M. Chinnaswamy Stadium.

Chahal confounded England with his clever variation and changes in length. The googly was a weapon that was judiciously used. The youngster accounted for England captain Eoin Morgan, ending a 64-run third wicket stand, Joe Root was then trapped plumb in front of the stumps while Moeen Ali and Ben Stokes succumbed to the ever-growing asking rate by holing out in the deep. From 119 for 2 in the 13th over, England had fallen devastatingly to 127 for 7 before Chris Jordan stepped out mindlessly to send Chahal to sixth heaven. Jasprit Bumrah helped himself to three wickets himself as England lost their last eight wickets for eight runs in 18 deliveries to crash to an embarrassing defeat.

India made all the right noises at the start of their defence of 203 but even they wouldn't have anticipated the magnitude of victory given the Chinnaswamy Stadium's propensity to produce high-scoring clashes. Chahal was brought on to bowl early and despite being reverse swept by Jason Roy for six off his very first delivery, the leg spinner had Sam Billings edging to slip (off his boot) for a golden duck. England came back well through Jason Roy and Joe Root to add 55 in the powerplay - two more than what Indian achieved at a corresponding stage before Virat Kohli unleashed his spinners on them.

Mishra started with a one-run over but India's punt with Suresh Raina's off-spin appeared to have turned the tide back in England's favour. Morgan hit three sixes in a 22-run over as England motored to 114 for 2 after 12 overs. Joe Root, who had purred along nicely into the forties, survived a dropped chance when debutant Rishabh Pant and Yuvraj got in each other's way but Mishra's miserly spell of 4-0-23-1 had pushed England into taking big risks. Pant atoned for his little error to catch Morgan on the sweep and Root added 1 to his score before falling to Chahal. The remainder of the innings passed in a blur as India closed out the game in a little less than half-an-hour's time.

Earlier in the day, India were powered to 203 thanks to quickfire fifties from MS Dhoni and Suresh Raina and a manic cameo from Yuvraj Singh.

Kohli lost the toss for a third successive game and despite handing a debut to teenager Pant, reprised his role as opener alongside KL Rahul. In what came as a shock to the still-filling stadium, the Indian captain was run out in the second over by Chris Jordan on the follow through attempting a non-existent single. The opening two overs had brought only two overs and England's slower balls on a two-paced cracked up wicket was proving a menace once again.

But Raina found his range quickly enough, slamming an inside-out six over cover point. India were aided by Morgan's decision to introduce Stokes and Plunkett immediately after and when Jordan returned for a second over, Raina had acquired enough confidence to take on his short ball and the fielder at the deep square leg. Two sixes off Jordan and India had recovered well to reach a powerplay score of 53.

Rahul fell for 22, just when soon after slamming a 98-metre six. And the dismissal was not without its own share of drama. Television replays were quick to indicate that umpire Anil Chaudhary had failed to pick up Ben Stokes' overstepping transgression. This after the much-maligned C. Shamshuddin withdrew from on-field duties for not feeling 100%. Dhoni walked out at No. 4 and instead of allowing the spinners to dictate proceedings, as India have been doing in the last two games, Dhoni and Raina were aggressive against Adil Rashid and Moeen Ali despite there being just a hint of spin to keep England's spin duo interested.

Rashid was the primary target, with both batsmen peppering the mid-wicket boundary with a six apiece to take 23 off the leggie's two overs. The leggie also shelled a hard return catch off Raina, when on 47, and by the time Plunkett eventually dismissed the southpaw with a slower delivery, the Raina-Dhoni combination had hit 55 in a little over six overs.

Dhoni ensured the boundary barrage continued, hitting Stokes for a couple of boundaries in the 17th over to move closer to his fifty. His maiden T20I half-century, achieved in the Jordan, passed off as a subtext as Yuvraj went to town on England's death-overs specialist. Staying deep in his crease, Yuvraj used his gifted bat swing to hit near-yorkers over long-on for three sixes and a four in a 24-run over. He was dismissed in almost comical circumstances when he failed to read a Mills slower ball but his rapid 57-run stand with Dhoni meant India had breached the 200-run mark. There were apprehensions if India had enough. As Chahal proved so admirably, they needn't have worried at all.