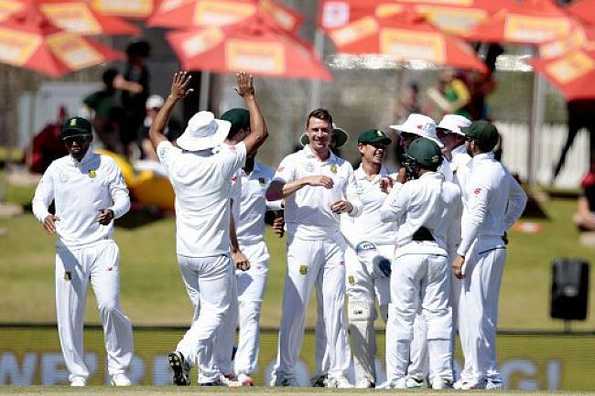 South Africa have completed yet another series win against New Zealand after a comprehensive victory in the series decider at the Super Sport Park in Centurion. After being set a target of 400 to win in the fourth innings, New Zealand wilted to 7 for 4 before folding for 195. Dale Steyn was one again the thorn in the flesh for the Black Caps taking 5 for 33 in the second innings, taking his match tally to 8 for 99. Quinton de Kock was awarded Man of the Match for his twin fifties and six dismissals in the match.

Stat highlights from the last two days of the second Test in Centurion:

204 Winning margin for South Africa, the highest for them (in terms of runs) against New Zealand. The only higher margin was by 358 runs in Johannesburg in 2007.

4 Wicketkeepers scoring fifty or more twice in a Test while opening the batting. The ones to do it before Quinton de Kock in this Test were Dick Spooner against India in 1951, Farokh Engineer against England in 1973 and Kamran Akmal against South Africa in Lahore in 2007.

363 Difference in runs scored by South Africa's top in the first and second innings. They scored 393 in the first and 63 in the second. De Kock scored 50 while none of the other four managed to get to double figures.

4 Instances of both openers getting dismissed for golden ducks in the same innings. Herbert Sutcliffe and Eddie Paynter against New Zealand in 1933, Mohsin Khan and Mudassar Nazar against England in 1982 and Marvan Atapattu and Sanath Jayasuriya against South Africa in 2000 are the only previous instances before Tom Latham and Martin Guptill in New Zealand's second innings.

2 Dale Steyn became the second bowler to dismiss two opening batsmen from the opposition for golden ducks after Bob Willis against Pakistan in Leeds in 1982.

1 run scored in this Test by Ross Taylor is his lowest aggregate in a Test match. The previous lowest when he batted twice was eight against Pakistan in Abu Dhabi in 2014. In seven innings in South Africa he has scored just 47 runs with a highest score of 17.

7 It is the lowest score for which New Zealand have lost their first four wickets in an innings. The previous lowest was 14 runs against England in Auckland in 1955, when they were eventually bowled out for 26 - the lowest ever total in Test cricket.

3 Instances of three of New Zealand's top four getting dismissed for ducks in the same innings. It happened against Pakistan in Wellington in 1973 and against South Africa in Johannesburg in 2006 before today.

68-run stand between Henry Nicholls and BJ Watling is the second highest fifth wicket stand for any team after losing their first four wickets inside 10 runs. The only higher stand was 86 between Carl Hooper and Richie Richardson against Australia in Brisbane in 1992.

76 by Nicholls is the highest score for him in Tests eclipsing 59 he made on his debut against Australia in Wellington earlier this year. It is the third highest for a New Zealand batsman batting at No. 5 or below in the second innings in South Africa after 142 by John Reid in 1962 and 78 by Craig McMillan in 2000.

56 Wickets taken by Dale Steyn in Tests at SuperSport Park in Centurion - the most by any bowler. Steyn picked up his fourth five-wicket haul here and averages just 17.12. The only other bowler to take 50-plus wickets at the venue is Makhaya Ntini who has 54 wickets from 10 Tests at 21.22.

68 Wickets for Steyn against New Zealand in 12 Tests, the fourth most for any bowler. His average of 16.04 is the best for any bowler against them with a minimum of 50 wickets. He has taken more wickets only against one opposition - 69 against Australia in 14 matches.

13 Consecutive Test matches where South Africa have gone undefeated against New Zealand - the joint most for them against a particular opposition. The last time New Zealand beat them in a Test was in Auckland in 2004.

Instances of New Zealand winning a series against South Africa in 15 attempts. All other teams (excluding Zimbabwe and Bangladesh) has beaten every other opponent at least in one series. They have lost all but one out of eight rubbers in South Africa.