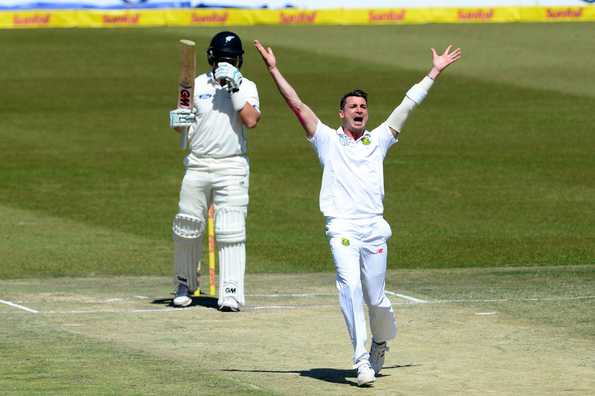 Dale Steyn bowled zest-filled spells to pick up a five-fer in the second innings, piloting South Africa to a crushing 204-run win against New Zealand on Day 4 of the second Test in Centurion on Tuesday (August 30). For the visitors, Henry Nicholls (76) played with maturity and tried to keep the visitors afloat, but he didn't receive much support from the other end as the hosts won with a day to spare.

After Faf du Plessis, the stand-in captain, declared the innings at 132 for 7 to set an imposing target of 400, Steyn wreaked havoc by demolishing the top-order. The 33-year-old fast bowler made an impact straightaway after the declaration by dismissing Tom Latham (0) and Martin Guptill (0) in the first over of the second innings.

Latham made an half-hearted attempt to shoulder arms to a delivery that was slanted across him, resulting in the Canterbury opener gloving it onto the off-stump. Guptill followed his partner back to the pavilion with a forlorn look on his face when he outside-edged a good-length delivery that shaped away from the right-hander to Hashim Amla at first slip. Ross Taylor (0) then got an unplayable ball from Steyn that stayed low and was rapped on the pads to be trapped in front.

Kane Williamson (5), who in the first innings showed the required batting aptitude when the carnage unfolded around him, was soon prised out by Vernon Philander. His intended drive to a delivery that nipped away off the seam only resulted in an outside edge and Quinton de Kock made a sparing dive to his right to snap up the chance. The Centurion track is historically known for offering variable bounce as the match progresses. The home side's pace bowlers took advantage of it to blow away New Zealand's top-order.

However, in what turned out to be a battle of wills between Steyn and the pair of Nicholls and BJ Watling (32), the duo answered New Zealand's call with gusty knocks. On a pitch which provided the pacers plenty of assistance, Watling threaded the gaps with crispness. He also showed the required defence and application to nullify Steyn's threat.

The South African-born New Zealand cricketer had his fair share of luck too. Philander tempted Watling to poke at a good-length ball that was bowled in the channel outside off and it flew towards Stiaan van Zyl stationed at second slip. However, the fielder couldn't latch onto the chance despite moving to his left. Watling also survived a confident review by the South African team for a strangle down the leg side off Philander in the 12th over. Replays indicated the ball might have deflected off the left glove, but the third umpire decided that there was inconclusive evidence to overturn the original decision.

His partner at the other end, Nicholls, largely hung back in the crease to bisect the gaps on both sides of the wicket with a diet of singles and twos. He also survived a scare when Paul Reiffel, the on-field umpire, answered a stifled appeal for a catch in the affirmative in the 18th over. Nicholls, though, placed his belief in the review. On replays, the UltraEdge showed that the ball had lobbed off the thigh pad straight to the fielder positioned at forward short leg, and the on-field decision had to be reversed.

Just when it felt as if the pair would guide them to Tea without further damage, Watling was adjudged leg before the wicket to a delivery that turned sharply from Dane Piedt. Watling asked for the review, but this time around, the HawkEye projected that it would knock over the top of middle-stump and the initial decision stayed.

Despite losing Watling at the fag end of the second session, Nicholls continued to play with resolve. He first joined forces with Mitchell Santer (16) to string together a partnership of 43 for the sixth wicket. Santner was finally dismissed by a peach of a delivery from Steyn that nipped back in considerably from round the wicket to beat his hurried defence and knock over the middle-stump.

Doug Bracewell (30) also gave a good account of himself before he was trapped in front by Philander. The lower-order batsman opted for the review, but to no avail. Nicholls, meanwhile, hustled his way to a gritty fifty. It was his ability to use soft hands that helped him to notch up a half-century in difficult conditions for batting.

Tim Southee (14) played and missed for a while before a toe-crusher from Kagiso Rabada ended his brief stay at the crease. Neil Wagner (3) couldn't keep out a fuller length delivery from Rabada and was adjudged leg before.

Steyn was then given the chance to pick up his 26th five-fer in Tests and he didn't disappoint, prising out New Zealand's mainstay in the second innings - Nicholls - for the final wicket. This is the first time, South Africa have won a Test series since beating West Indies back in January 2015, while New Zealand's wait for a Test series win against the Proteas continued.