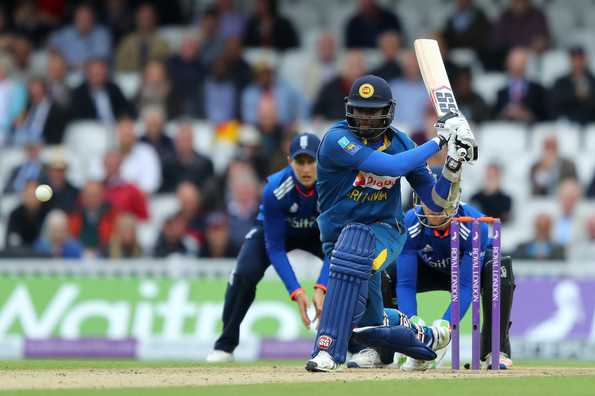 Sri Lanka were cruising at 127 for the loss of Kusal Perera's wicket, in 18.1 overs, when showers forced the players off the field for over two hours. When the rain subsided, the match was reduced to 42-overs-a-side affair.

Put in to bat, Sri Lanka suffered an early blow when Johnny Bairstow ran Perera out for just one in the second over. Mendis, however, attacked from the word go and posted a quick-fire half-century his second consecutive fifty of the series off just 44 deliveries. Gunathilaka kept him good company as the duo added 128 runs for the second wicket, ensuring Sri Lanka fought back quickly after an early wicket.

Gunathilaka raced to his first fifty of the series, off 51 balls, at the end of the 19th over, after the rain break. However, Adil Rashid helped the home team pull things back with the wickets of both the set batsmen in successive overs. He got rid of Mendis as Liam Plunkett pulled off an exceptional catch in cover region when the batsman was on 77. In his next over, Rashid had Gunathilaka caught by Moeen Ali, at mid-off, to reduce Sri Lanka to 158 for three.

Chandimal and Mathews, however, were in no mood to throw the solid platform away. The captain and vice-captain duo quickly added 87 runs for the fourth wicket, in just 80 balls, to take the visitors close to the 250-run mark. En route, the vice-captain registered his third consecutive half-century and the pair posted its sixth 50-plus partnership on the trot.

David Willey, coming back into the attack for his final spell, helped the hosts put the brakes on the run flow once again, by breaking the flourishing Chandimal-Mathews partnership with the former's wicket.

The in-form Mathews stayed till the end to ensure Sri Lanka don't falter in death overs. He carried on from where he had left off in the previous game and took his side past 300 for the first time in the series. The icing on the cake were the three back-to-back boundaries, off Plunkett, in the penultimate over, the first of which helped the Sri Lankan skipper bring up his 31st ODI fifty and power his side to 305 for 5 in 50 overs.

Due to the rain break in between, England's target was adjusted to 308 based on the Duckworth-Lewis-Stern method.