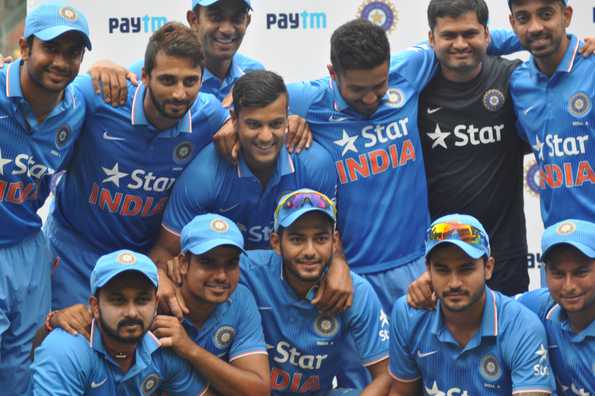 In a rain-hit encounter, Suresh Raina (104) and Sanju Samson (90) powered India A to a daunting total before Kuldeep Yadav (2/29), Sreenath Aravind (2/14) and Karn Sharma (1/28) scuppered the visitors' chase to help India A claim a series victory with a 75-run win (D/L method) against Bangladesh A in the third one-dayer at Bangalore.

Chasing a revised target of 290, the visitors were dented early, losing three wickets for a team total of just 24 in the ninth over. Sreenath Aravind, who made it to the senior T20I squad for the upcoming South Africa series in October, struck on either side of a brief rain break. Much like his previous two outings, Liton Das walked out to a tricky situation and looked determined to fight in his brief stay. Along with skipper Mominul Haque, he accelerated the scoring, taking on Rishi Dhawan with a straight six. Mominul complemented his efforts at the other end, prompting the India A skipper to bring spin into the attack.

The move paid off as chinaman bowler Kuldeep Yadav derailed Bangladesh A's attempts of a comeback by dismissing the two set batsmen Liton (21) and Mominul (37) in a span of four overs. Nasir Hossain, in a press conference, spoke about being under pressure each time he walked out to bat. Sunday's scenario was no different, as he joined Sabbir Rahman with his side tottering at 77 for five in the 20th over. The centurion from Friday, however, couldn't replicate his heroics on Sunday as he was cleaned up by Karn Sharma for 22. Kuldeep and Karn offered flight and drift to make life difficult for the Bangladesh A batsmen.

A third rain interruption, a stronger one this time, came with Bangladesh A on 141/6 in 32 overs, 75 runs behind the par score. After a half-an-hour's delay, the match was called off, handing India a 75-run victory.

Earlier, Suresh Raina capped of his final preparation before the South Africa series in style with a century while Sanju Samson showcased his flexibility in the batting order by notching up a well-paced knock of 90 after being promoted up the order. India A skipper Unmukt Chand weathered the early storm and displayed a lot of patience to lay the foundation for Raina and Samson to consolidate. Unmukt was steady in his approach and soon played his shots in a big stand with Samson (82 for the second wicket) before being castled by spinner Arafat Sunny. Raina arrived at Unmukt's departure and made his good start count with a 94-ball knock of 104. Raina's assured, and sometimes overpowering, approach rendered the Bangladesh A bowlers ineffective. Samson fed off Raina's growing confidence and expertise at the other end, chancing his arms regularly in his 99-ball knock of 90. With four boundaries two flat-batted pull shots through mid-wicket and two cheeky scoop hits to the fine leg fence, Rishi Dhawan sealed the innings with a late-surge to help the hosts post a big total.