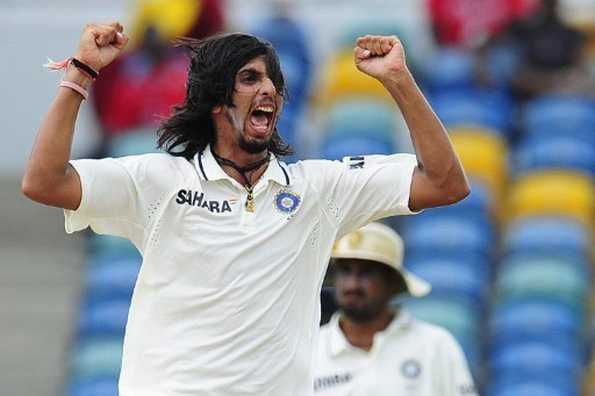 Ishant Sharma led the way in a morning session that was a feast for the bowlers. India lost their last four while Sri Lanka's Board President's XI lost their top five - all to Ishant in a frenetic session of play. The Premadasa wicket had a tinge of green and did help the seamers early on and Ishant appeared to have taken a cue from across the world from a certain Stuart Broad. He had five wickets in 3.3 overs including a wicket off his first ball of the day.

The Indian spearhead appeared quite eager to get the ball in hand even before the start of play. Bhuvneshwar Kumar started proceedings with Ishant doing repeated run-ins and shadow practice at long leg. As soon as he got the ball, Ishant was on the money. Sri Lanka's opener Kaushal Silva was trapped LBW by a delivery that jagged back in while the other opener Dhananjaya de Silva was bowled by a full delivery off the last ball of the same over. Bhuvneshwar, at the other end, went past the bat repeatedly as all the batsmen found the going tough against India's new-ball pair.

Ishant was on a hat-trick when he had Upul Tharanga LBW off the next ball he bowled. He missed out on that but created another chance soon after. Thirimanne who was defiant for 20 balls finally edged to slip, where Rahul took a smart, low catch. Kusal Perera was done in by a pacy, full delivery that jagged in. Ishant now had five and his figures were an incredible 3.3 - 1 - 5 - 5. Three of the five batsmen he picked in the morning session will possibly be facing him in a Test just a few days later. Kaushal Silva, Thirimanne and Tharanga won't forget this spell from Ishant in a hurry. SL BP XI went into Lunch at 35/3.

Earlier in the day, the Indian think-tank decided to retire centurion Ajjinkya Rahane overnight and give the tail-enders a hit. That didn't last long as the last three wickets fell for 37 runs with Kasun Rajitha ending up with 5/68 as India folded for 351. That five-fer was just a precursor for things to come, as it turned out.