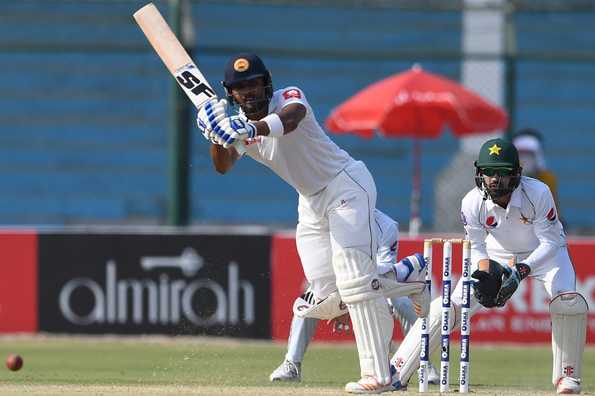 Just like Day 1, the second day of the Karachi Test between Sri Lanka and Pakistan had its fair share of twists and turns. Sri Lanka took a healthy first innings lead of 80 to edge ahead. However, Pakistan finished the day strongly at 57 for no loss, in arrears by just 23.

For long periods of the day's play, Dinesh Chandimal's 74 had given the visitors the edge. The former Sri Lankan captain waded through testing spells from the trio of Mohammad Abbas, Sheen Afridi and Naseem Shah and once he reached his fifty, he also cracked drives and the occasional pull to put Sri Lanka in front.

The middle-order batsman also found able an ally in Dhananjaya de Silva (32) and later on in the innings, Dilruwan Perera (48) gave him good support. De Silva, in particular, looked in fine touch, taking on Yasir Shah with a four and a six in the 43rd over. Dhananjaya and Chandimal had also helped the tourists to make a timely recovery after they found themselves in a spot of bother at 80 for 5.

Just that after stitching a stand of 67 with Chandimal, Dhananjaya tried an ill-advised hook off Shaheen Afridi and was caught at fine leg. Perera, who replaced Niroshan Dickwella in the middle, with the score reading 184 for 7, also compiled a vital hand. He also took a blow on his neck while facing Naseem. However, he decided to continue his innings. Even after Chandimal fell to a soft dismissal, cutting Haris Sohail's part-time spin straight into the hands of the fielder stationed at point, Perera added 36 vital runs in the company of number 10 batsman Vishwa Fernando.

Eventually, the impressive Afridi provided the finishing touches by dismissing Perera and Kumara off successive deliveries. The left-arm pacer picked up his maiden five-for in Tests while Abbas bowled with penetration and found seam movement to pick up four scalps. Naseem, the tearaway, bowled incisively but was luckless through the course of the day.

After handing a sizeable lead, Pakistan needed a solid start. The duo of Abid and Masood didn't just give the home side a solid start but also cracked a string of boundaries to wipe off most of the deficit. Abid, in particular, played aggressively, punching and glancing the Sri Lankan bowlers to the boundary hoardings. He also survived a review for an LBW off Vishwa Fernando's bowling in the ninth over.

The tourists, though, would be encouraged by the fact that Lasith Embuldeniya, the left-arm spinner has already enough purchase in the second innings. So, Day 3 could turn out to be the 'moving day' of the Test.