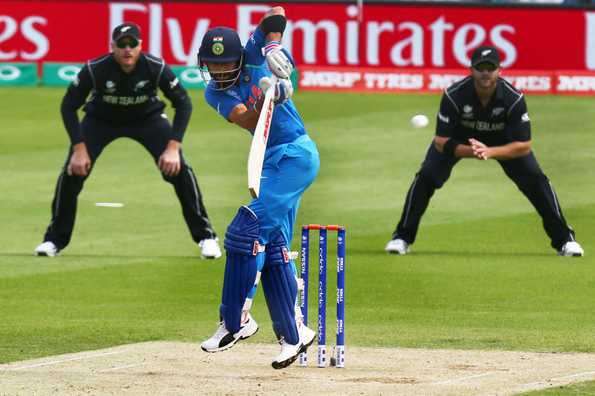 Mohammed Shami and Ravindra Jadeja ripped through the New Zealand batting to set up India's comfortable win in the rain-marred first warm-up clash at Kennington Oval in London on Sunday (May 28). The duo shared five wickets between them, well aided by Bhuvneshwar Kumar's three-for, to wrap up New Zealand for 189 before skipper Virat Kohli hit an unbeaten 52 to put India on course. Relentless rain however forced the game to be called off early when India were 45 runs ahead on DLS Method.

Their five-wicket loss at the hands of Bangladesh in the final tri-series game in Ireland notwithstanding, New Zealand had considerable game time in the format before heading to England, while their opponents for the day, India, were coming fresh off a nearly two-month long T20 fiesta back home. And yet, the defending champions looked a far better side on the day, warming-up for the new international season with a comprehensive win.

Shami, more importantly, was at the centre of attention at the start of the contest, having not played a 50-over match in over two years since India's semifinal exit at the 2015 World Cup. But the pacer showed no signs of rustiness whatsoever, wreaking havoc in his opening spell to leave New Zealand three down for 63 in nine overs. Put in to bowl first on a seemingly flat track, the breakthrough came as early as in the third over when Martin Guptill, undone by extra bounce, top-edged straight to the man at mid-off. Luke Ronchi tried to restore parity with a brief counter-attack - hitting Shami for back to back boundaries and then a six - but the bowler prised out Kane Williamson and Neil Broom off successive deliveries in the same over to push New Zealand on the backfoot once again.

The only bright spots in New Zealand's spectacular collapse were Ronchi's blistering 63-ball knock worth 66 amidst the chaos early on and, later, James Neesham's unbeaten 46 that helped them post a total that seemed improbable at one stage. Neither of them got any decent support at the other end to eye a partnership strong enough to push for a challenging score. Ronchi raised his fifty off 42 deliveries and Corey Anderson tried to up the ante by dispatching Bhuvneshwar to the boundary twice. But the bowler made a strong comeback in his following over to curtail Anderson's heroics with a short ball. The allrounder pulled unsuccessfully, and the inside edge knocked out his leg stump.

Four cheap wickets brought the pressure back on Ronchi, who sniffed an opportune moment to deposit one from Pandya into the long-off stands but couldn't last very long. Kohli brought on spin from both ends and Jadeja's double blow tightened the screws on New Zealand. First one of his victims was Ronchi, who was cramped for room trying to cut and the off-stump took a hit. An over later, MS Dhoni produced another one of his blink-and-you-miss stumpings to catch Colin de Grandhomme well out of his crease and give Jadeja his second scalp.

The responsibility was on Neesham and Mitchell Santner to push for a fighting score and while the former did drop anchor, the latter holed out to Jadeja to help R Ashwin open his account. While wickets kept tumbling at the other end, Neesham kept finding the odd boundaries to pick whatever runs were on offer. Umesh Yadav sent back Adam Milne while Bhuvneshwar cleaned up the tail to keep New Zealand to a manageable total.

It was business as usual for Kohli, who hit a well-composed fifty to lead India's reply. The defending champions though were also aided by a bunch of dropped chances - Trent Boult being the unlucky bowler on most occasions.

Ajinkya Rahane and Shikhar Dhawan - both fighting for a slot in India's XI - walked out to press their claim but the former endured another disappointing outing. Tim Southee got the breakthrough, one ball away from Lunch, when Rahane attempted yet another hook, only to find Boult at deep backward square.

Dhawan, on the other hand, settled in after a scratchy start. He got an early reprieve on one when Broom grassed a straightforward chance and made New Zealand pay the price by adding 39 more to his tally. The opener looked set for a morale-boosting fifty but his wicket - completely against the run of play - left him ten short. Neesham broke the 68-run second-wicket stand as he fed Dhawan a short ball which he pulled straight to Anderson at short midwicket. This was followed by another wicket in quick succession. Dinesh Karthik, India's last minute replacement for injured Manish Pandey, struggled during his nine-ball stay before Boult could finally see a wicket against his name.

Kohli brought up his fifty in the 24th over. Dhoni was the third Indian batsman who was gifted a life off Boult when de Grandhomme dropped a dolly at sweeper cover. Adding insult to injury, the ball flew over the ropes for a six. But the rain intervened when India were 61 short of the target. The Kohli-Dhawan show had however ensured India were 45 runs ahead on DLS and declared eventual winners.