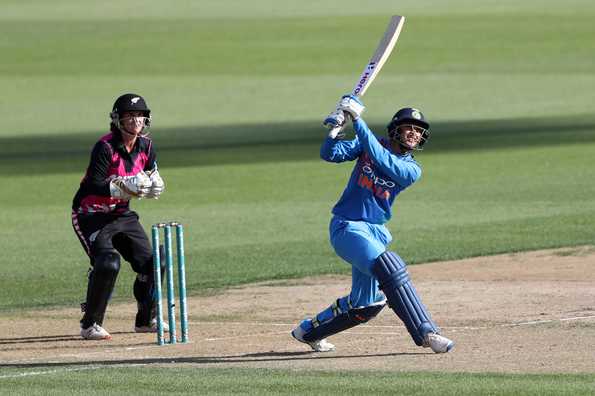 The third T20I between New Zealand and India women was yet another case of Smriti Mandhana firing with the bat but not finding much support from the rest. Although it wasn't a major collapse like what India suffered in the second T20I, India fell at the final hurdle yet again to suffer a 3-0 series defeat. The vice-captain, however, was pleased with the fight shown by her team during the series while admitting that India still have batting-related issues to address.

For the second time in the series, Mandhana scored a half-century and provided the platform for India, only for the middle order to succumb to pressure. While the visitors had left out Mithali Raj for the first two matches, the experienced batter returned for the final game of the series and found herself in a situation of having to guide India in the latter part of the chase.

When Mandhana fell for a 62-ball 86 in the 16th over, India needed 39 off 27 deliveries. Raj and Deepti Sharma, despite their 39-run association, failed to get India over the line as they fell short in chase of 162 by two runs, with the former managing only a single off the final ball when India required four.

"I think the girls fought really well in the series. If you look back and see, 70-80 per cent of the times we were in winning positions. So that's a good takeaway. But there are a lot of things which we can improve. We need to improve and address those issues as soon as possible. We need someone who can bat through 20 overs and someone who can go in the middle order and get those runs later on," Mandhana said after the game.

While India started the New Zealand tour well, clinching the ODI series in the second game, their performances went down after that, and Mandhana attributed that to complacency. "We did a lot of good things in this series, we especially played well in the first two matches of the ODI series. We got a bit complacent in the third match and going forward, we hope to go in with the same intensity in all matches."

The T20I leg of the tour coincided with the men's games, with each of the three matches - women and men - being played as double headers - which Mandhana felt was a good experience for her side, especially playing in front of big crowds - which usually isn't the case for women's cricket in bilateral series.

"A lot of girls do not have the experience of playing in front of big crowds. We generally get those crowds during the World Cup and a few girls find themselves under pressure playing in front of such crowds. If we get crowds like this in (bilateral) series then it will be really good because everyone will be prepared to play under pressure. The crowd sets the momentum - whenever you hit a four or a six and the crowd cheers, you feel like going more and more. You don't get the same kind of feel or happiness playing in empty stadiums," she said.