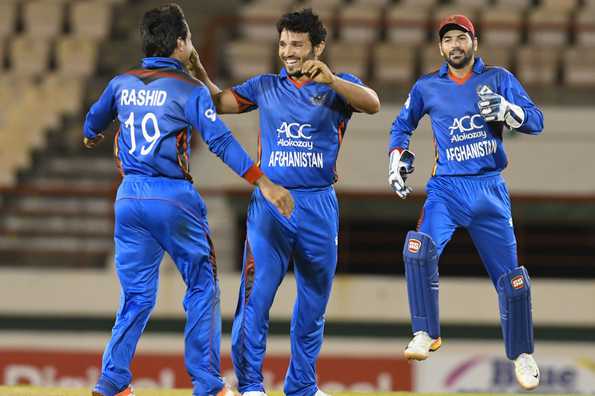 Rashid Khan tamed Windies in their own backyard to seal a 63-run win for Afghanistan and helped them take a 1-0 lead in the three-match One-Day International series at the Darren Sammy National Cricket Stadium in St Lucia on Friday (June 9). Rashid, at one stage, picked up four wickets in the space of ten deliveries for just one run to leave the hosts reeling at 70 for 6 in a chase of 212. The legspinner picked up his second five-wicket haul in ODIs and eventually ended with 7 for 18 - the fourth-best figures in ODIs after Chaminda Vaas, Shahid Afridi and Glenn McGrath.

West Indies had lost Kieron Powell in the third over, trapped lbw by Dawlat Zadran, but rebuild well to reach 41 for 1 courtesy Evin Lewis and Shai Hope. However, Lewis's dismissal opened the floodgates with Rashid taking over to help Afghanistan seal a comfortable win.

Asghar Stanikzai held back Rashid for 22 overs but it took the legspinner just two deliveries to create an impact. After dismissing Jason Mohammed (7) on his first delivery, he trapped debutant Roston Chase plumb in front in the next delivery. Jonathan Carter defended the hat-trick delivery and then played out the over, but Rashid's second over left Windies in tatters as he delivered a double-wicket maiden, first bowling Jason Holder and then having Hope caught at point.

Rashid kept delivering the wrong'uns and the Windies batsmen kept failing to pick them as they slipped away in the chase. Ashley Nurse became Rashid's fifth victim - trapped in front - as the fans watched in disbelief. Carter (19) and Alzarri Joseph (27) scored 45 for the eighth wicket but that just delayed the inevitable.

Earlier, Javed Ahmadi scored a fighting 102-ball 81 and late cameo from Gulbadin Naib (41 off 28) took Afghanistan past the 200-run mark after they struggled for most parts of the first innings.

In gloomy conditions and a green track welcoming the teams, Afghanistan surprisingly chose to bat first. The decision perhaps was because they didn't want their batting to be put under pressure after a poor preceding Twenty20 International series, in which they were whitewashed 0-3.

Holder nipped out Noor Ali early to give the hosts the much-needed early breakthrough. Rahmat Shah and Ahmadi stitched a 55-run stand for the second wicket but took too long to get going. Just when it looked like they would pick up the ante, Rahmat cut a short and wide one from Shannon Gabriel straight to point.

Reduced to 68 for 2, Afghanistan never really were able to break the shackles. Samiullah Shenwari (22 off 46) and Stanikzai both struggled, and the pressure kept mounting as the scoring rate barely climbed over three runs per over. The struggles of other batsmen also bogged down Ahmadi as he went into his shell and eventually paid the price. Trying to tap a short ball towards third man from Miguel Cummins, all he managed was a faint edge to the wicketkeeper.

Shenwari fell soon after leaving Afghanistan in a precarious position at 131 for 5 after 38 overs. Windies could have restricted the visitors to a bit less but lacked intensity on the field. They looked content with the lack of boundaries and went with the flow when they should have attacked and been ruthless. They let the innings meander along and Afghanistan made full use of it by flaying the bowlers in the death overs.

With nine overs to go, Afghanistan's hopes were firmly pinned on the experienced shoulders of Nabi (27). The late thrust though came from Naib who flayed the pacers with ease as Nabi started playing second fiddle to the young ward. Their stand in the end was just what Afghanistan needed as it gave them the momentum going into the break before Rashid spun his web around Windies to deliver a memorable win.