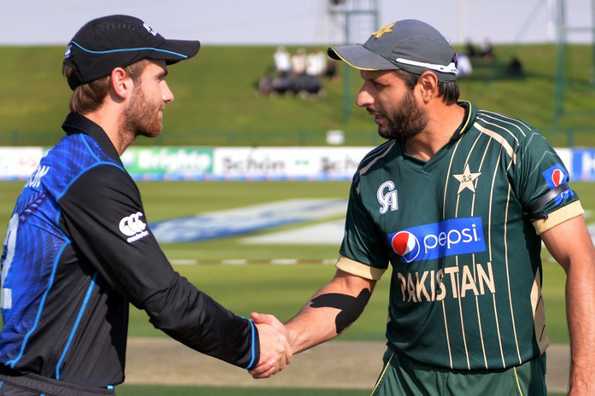 The Tests were drawn, the T20s, split. The ODI series is level at 2-2. The series needed a winner. At the beginning of the tour, both managements echoed sentiments that they would use this tour as a part of an extended build up to the ICC Cricket World Cup 2015. That still held true ahead of the final game of the tour. However, confidence can be key to a World Cup success and nothing inspires confidence than series victories. And that's what the two teams were after.

The only team news ahead of the series decider was that Daniel Vettori chose to fly back to New Zealand on the eve of the game to attend his brother's wedding. Pakistan, on the other hand, were boosted by the return to form of senior-pro Younis Khan, despite their narrow seven-run loss in the last game. They were hopeful of better contributions from their top order to create a settled line-up.

Kane Wiliamson won the toss for a second game in running in Abu Dhabi and as was the case the last time, opted to bat again. Vettori, who missed the game because of personal reasons was replaced by Nathan McCullum. Anton Devcich was given another run in the playing eleven.

Pakistan's opening conundrum was solved, temporarily, because of an injury to Mohammad Hafeez. Asad Shafiq would play in the middle order with Nasir Jamshed and Ahmed Shehzad retaining their places at the top of the order. Afridi also opted for an extra spinner in the side with Zulfiqar Babar replacing Sohail Tanveer.

In the last match, Guptill and Brownlie had put on 87 for the first wicket. There was to be no repeat of that in the decider. Despite a brisk start, Guptill was removed by Mohammad Irfan with a back-of-a-length delivery angled across him. Guptill poked at that and the outside edge was taken by a diving Asad Shafiq in the slips.

New Zealand have only 11 fit players available for the game after losing out others to injuries and personal leaves.

Skipper Kane WIlliamson and Dean Brownlie consolidated the loss of the early Guptill wicket. With Afridi introducing himself and Zulfiqar Babar into the attack within the first powerplay, on an aiding pitch, the batsmen remained circumspect in a bid to lay down a platform for a late assault. Something that worked for them in the 4th ODI on the same pitch. The duo added 61 for the third wicket before drinks

Dean Brownlie was dismissed another time after getting set. This time he had combined well with skipper Kane WIlliamson after Martin Guptill's early dismissal. And just when the duo had added 60+ to allay any fears of a top-order collapse, Brownie was caught plumb in-front of the stumps by a Zulfiqar Babar arm-ball.

The Williamson juggernaut rolls on! It has been that kind of a year for Kane. Showing steadfastness and assurance in equal measure, the Black Caps skipper stepped up to the plate in the series decider. He reached his 13th ODI fifty with a single to long-on

Kane Williamson and Ross Taylor put on a 100-run stand for the third wicket to drive New Zealand after Martin Guptill and Dean Brownlie were dismissed early in their innings.

Ross Taylor went on a rampage soon after the wicket of his captain. The right-hander was severe against a hapless Pakistan attack and helped the side amass 75 runs in less than 8 overs. New Zealand ended with a competitive 275 on the board.

Ross Taylor went on a rampage soon after the wicket of his captain. The right-hander was severe against a hapless Pakistan attack and helped the side amass 75 runs in less than 8 overs. New Zealand ended with a competitive 275 on the board.

Matt Henry gave New Zealand a dream start as he had Nasir Jamshed and Younis Khan back in the hut before they could even get into their groove. The double setback would hurt Pakistan immensely, and they will be hoping for a strong performance from their remaining batsmen.

Ross Taylor smashed a brilliant 88 to lift his side towards the end. ©Reuters

Ahmed Shehzad helped Pakistan overcome the early losses with a well-paced fifty. The right-hander looked comfortable out in the middle and was able to take full toll when bowlers erred in line or length. However, he was out against the run of play and Pakistan also lost the wicket of Umar Akmal soon after to find themselves in a spot.

Haris Sohail, already having impressed everyone with his all-round abilities, ensured he enhanced his growing reputation further with a timely fifty to lift the home team's hopes.

Matt Henry finished the series on a high as he ended with supern figures of 5/30 to help bowl out Pakistan for a paltry score of 207. The 68-run win gave New Zealand a 3-2 series victory away from home and a huge lift ahead of the World Cup.

The real credit goes to the Kiwi bowlers, who bowled in good areas and kept the Pakistani batsmen at bay. The star of the show was Matt Henry, who finished with bowling figures of 5/30 in his 9 overs. All the others bowlers impressed as well, keeping the pressure on the Pakistanis. At the end, the Pakistani batting line-up crumbled while going for the win. Pakistan's poor record in series deciders will continue to haunt them in the future as well. They have let another series slip from their grasp.