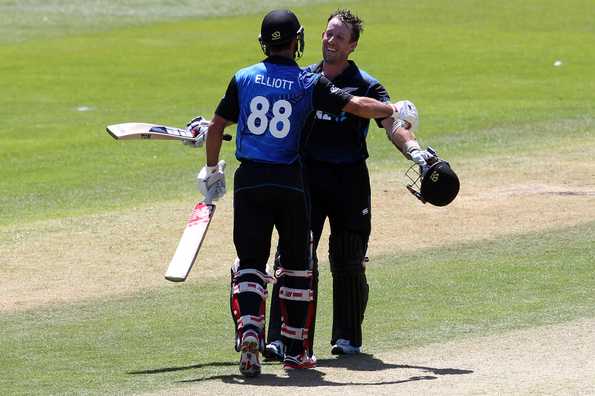 Before the start of the ODI series, there was a perception that New Zealand relied too heavily on Kane Williamson and Brendon McCullum for their success. There were some weak points in the team which made their ODI set-up a little shaky. After five matches in the series against Sri Lanka, the hosts are leading 3-1 and they are ironing out their weak points ahead of the World Cup.

The big gains in the last two matches have been Luke Ronchi and Grant Elliott. New Zealand's wicketkeeper helped them close out a thriller at Nelson thanks to his 15-ball 32 and a couple of days later, he repeated his heroics in a spectacular fashion in Dunedin. His unbeaten 170 was the third-highest score by a wicketkeeper and the highest by a No 7 batsman.

On the other hand, Elliott has also redeemed himself after being sidelined in the New Zealand team for close to a year. His crucial 88-run stand with Williamson in Nelson and his world record 267-run stand with Ronchi at Dunedin have established him as the batsman who can drag the team out of a tough situation. Slowly, New Zealand are assuming a feeling of completeness in both bowling and batting.

Sri Lanka, on the other hand, are crumbling in all departments. The team is still heavily reliant on Mahela Jayawardene, Kumar Sangakkara and Tillakaratne Dilshan for big scores while it is missing the experience of Lasith Malinga. Sri Lanka haven't been helped by the absence of Angelo Mathews, who will be absent for the sixth ODI as well due to a calf strain. With the bowlers going for plenty in the fifth ODI, there might be some changes to the bowling department.

The batting looks in great condition but the top order will be aiming to avoid a repeat of their Friday collapse, when they were in trouble at 93 for five. Martin Guptill still continues to blow hot and cold while Ross Taylor will be desperate to change his luck, having scored just one fifty in the last eight innings and averaging just over 30. The only changes in the team might be in the bowling and it could be in the spin department. Nathan McCullum did not bowl his full quota of overs and this might tempt the team management to play Daniel Vettori in the next match.

With Mathews missing out, Lahiru Thirimanne will again captain the team. Sri Lanka will probably include Rangana Herath in order to contain New Zealand's aggression. All the bowlers took some stick on Friday, particularly Suranga Lakmal, who went for 93 in his 10 overs, could be excluded from the team on Sunday.