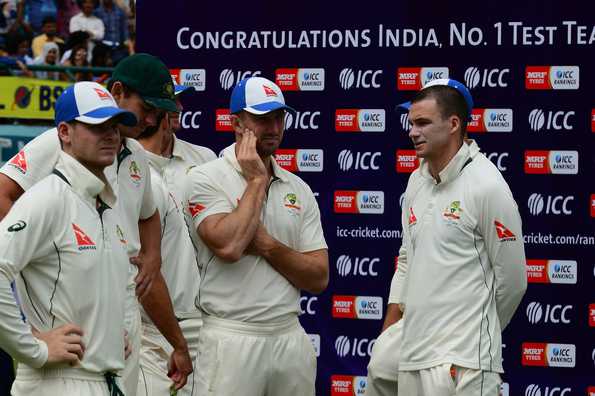 After a spirited performance in India, Australia coach Darren Lehmann wasn't short of words to praise his skipper Steve Smith, who he felt rose to a different pedestal not just as a batsman but also as the leader of the pack. The four-match Test series in India was always going to be Australia's sternest test, but the Smith-led side left everyone picking their jaws off the ground after a fighting display throughout.

They ran their hosts the closest, compared to all other touring sides during the India's home season. India eventually won the series 2-1 to cap off a successful home season, Australia deserved a pat on the back for their resolute performance.

"He's been brilliant. He's been unbelievable. He's been Bradman-like with the bat but all the stuff behind the scenes has been exceptional," Lehmann said on Tuesday. "Really pleased for him and what he's brought to the team as a leader. The way they've gone about it has been impressive."

Not long ago, Australia were highly vulnerable after succumbing to an abysmal three-match series loss at the hands of Sri Lanka. They returned home to another disappointing Test series defeat to South Africa. With the spotlight on Smith and Lehmann, Australia slowly but steadily managed to turn the tide in their favour, starting with a 3-0 cleansweep against Pakistan at home, before handing New Zealand the same treatment in the Chappell-Hadlee series.

For the tough Indian assignment, Australia needed to be at their very best. Despite finishing second best to the home side, Lehmann expressed his delight at the performance of his young squad.

"They're young, they've been up against it, the pitches have been as we would expect. There's a lot of learning in this group over this tour. They're all hurting and disappointed for the result but I'm really pleased with the effort and the attitude at trying to change the way we play here. He's led from the front, the captain. Three hundreds in four Test matches is pretty special," Lehmann said.

Lehmann was all praise for his captain's commitment, not just on the field but also off it. He also felt that his strength of character, especially during the tough times that he and the side had to endure on the face of the DRS controversy during the Bengaluru Test, was laudable.

"They have been excellent. There have been difficult conditions there is no doubt about it. They haven't whinged once, they've been just getting on with the game," Lehmann said. "They've copped a lot from Indian media and that's just the way it is over here. I've been pleased the way they have handled it.

"We have decided we are going a different way about the way we play. Obviously we're less aggressive than we have been in the past. And I'm pleased with the way they have gone about it. The young group will grow. They will get better. We weren't good enough in this series, there is no doubt about that. We missed big opportunities to win the series. But if they keep learning and keep growing and keep getting better, it is a group that can play a long time together. That's the pleasing thing."

The coach also believed that Smith had all the attributes to be in the company of the all-time best leaders that the country had produced, and his approach to be constantly involved with every aspect of the sport has helped him become so impactful. "Yeah I think so. He's a cricket nuffie; loves the game. He's passionate about the game, loves the game, loves his players.

"He helps support staff out. Behind the scenes, he's into it every day, making sure everyone is okay. He's a different leader to Michael [Clarke], to Ricky [Ponting], to [Mark] Taylor, to [Steve] Waugh. And he's working out his own identity as a captain. Everyone is proud of him. So pleased with where he is going. He'll just get better and better."

Lehmann also refrained from comparing this side to Clarke's team in respect to Ashes performance, and felt that this side is different from its predecessor. The approach towards the game and the constant urge to play as a cohesive group has been a great factor about this unit, and Lehmann believed that he too as a coach has changed his methods in recent times to stay relevant. Asked to ponder where this team was in relation to the side led by Clarke which won the Ashes four years ago, Lehmann said Smith's men were building as a team, rather than looking to atone for a series of defeats to England. Australia had lost three Ashes series in a row up to that point.

"I don't think the group is at that stage. That group back then was right at that stage. I mean, they copped a lot for a few years so they wanted to give some back. This group is just playing a game of cricket," Lehmann said. "I have actually changed a bit in my ways as a coach. I've really enjoyed watching the way they go about it. So, for them, they have had to work out the way they want to play as a group and I think it has been brilliant.

"I think the other style was right for that group at the time but this group wants to play a different way and that's okay as well. I think you have got to change as a coach, change as a captain, and players.

"They know they are going to cop different decisions and different pitches and different conditions wherever they play, and they are just trying to get better. My son loves watching the Australian cricket team and I hope everyone's son does," Lehmann said.