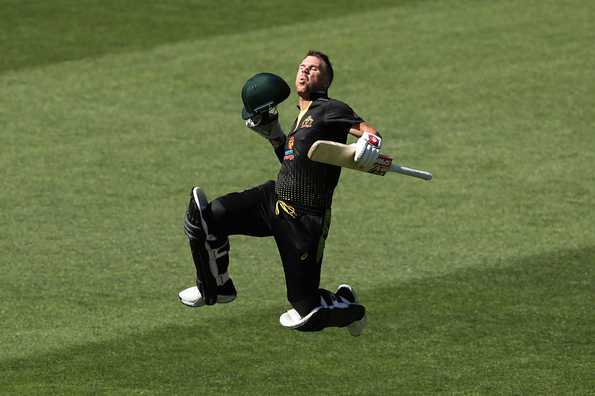 David Warner scored his maiden T20I century on his 33rd birthday as Australia began their home summer in the best possible manner against Sri Lanka at the Adelaide Oval. The hosts registered their biggest T20I win in terms of runs to hammer the visitors and send a statement to the rest of the cricketing world exactly 12 months before the World T20 scheduled to be held on these shores.

Sri Lanka's decision to bowl first backfired right at the start with Aaron Finch fetching three fours in the opening two overs. Warner then got into the act as well, smashing two fours and a six off Kasun Rajitha who endured a torrid evening.

By the end of the powerplay, Australia had already posted 57 on the board. Sri Lanka woes only compounded after the powerplay as Finch cut loose with back-to-back sixes off Wanindu Hasaranga. The Australian skipper then reached his half-century with another six, this time off Rajitha. At the other end, Warner too brought up his fifty in the same over with successive sixes.

47 runs had come in three overs and Sri Lanka badly needed a breakthrough, which came in the 11th. Finch tried to smash one more out of the ground but a top edge brought an end to his stay, much to the visitors' relief. Having set a platform, Australia reshuffled their batting order, making Steve Smith wait for his first opportunity with the bat at home post his international comeback. Glenn Maxwell took little time to get going and raced to 25 off just 10 deliveries. At the end of the 16th over, Australia had 185 on the board with both Maxwell and Warner set to blaze away.

A cheeky reverse sweep boundary off Nuwan Pradeep was the highlight of Maxwell's cameo until he bettered it with a helicopter six immediately after getting to fifty off just 22 balls. Though Maxwell departed in the last over, Warner got to his first century in the format with a single off the final ball of the innings and followed it with a trademark leap celebration. Almost one-third of the total came off the four overs bowled by Rajitha as he finished with the worst-ever figures in T20I cricket (4-0-75-0).

A target of 234 for Sri Lanka meant Australia already a firm grip on the contest at the halfway stage. The chase, as expected, proved to be a mere formality. By the time the powerplay concluded, Sri Lanka lost their top order tamely. Kusal Mendis miscued a pull against Mitchell Starc whereas Danushka Gunathilaka and Bhanuka Rajapaksa fell off successive deliveries in a Pat Cummins over.

Ashton Agar was the next to get into the act as Oshado Fernando inside-edged one on to his stumps. At the halfway mark, Sri Lanka had only 49 on the board, losing four in the process. Starc then came back to york Kusal Perera as the visitors continued to crash and burn. Adam Zampa took full toll on them to add three wickets to his tally in the latter part of the innings as Sri Lanka finished with just 99 on the board.