I am new to international cricket, I made a mistake - Umpire on the no-ball controversy 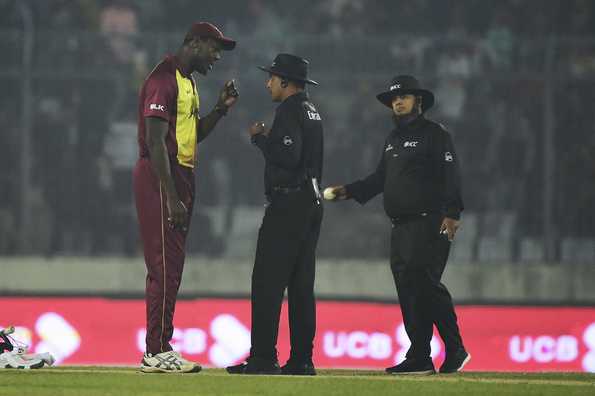 Tanvir Ahmed, the Bangladesh umpire who had erroneously called Oshane Thomas for overstepping during the third T20I between Bangladesh and Windies, has admitted his mistake with the excuse that he is new to international cricket.

In the fourth over of Bangldesh's chase on Saturday, when Liton Das top edged a shot to mid off, the umpire had called it a no-ball. However, replays on the big screen suggested that a part of Thomas's foot was behind the line.

A huge argument ensued with Windies skipper Carlos Brathwaite demanding to review the decision. However, after heated discussions with the on-field umpires, the third umpire and the match referee, it was decided that the decision couldn't be reversed and the batsman was allowed a free hit, which was smashed for a six.

The controversy delayed play for a long time but Windies came back strongly to win the match, and with it, the series. Brathwaite, in his post-match press conference, said that he doesn't believe the officials were 'cheating' but felt that the 50-50 decisions weren't going the way of the visitors in the limited-overs series.

For Tanvir, that wasn't the first error of the series. In the second game, he had wrongly adjudged a Windies batsman out leg before when the player had inside edged the delivery. In fact, in the third T20I itself, in the same over earlier, he had already wrongly called Thomas for overstepping.

"In terms of a no-ball, there is always the issue of the foot and the line being close to each other," Tanvir told Prothom Alo. "And if the bowler jumps quickly, there are occasions when it is difficult to spot it. I am new to international cricket, I made a mistake.

"If you look at my past, I don't have a bad history. It was one mistake. Inshallah, I will come back well. Every person has good days and bad days. Yesterday I had a bad day. The match just ended yesterday. I am not focusing on anything else. I am thinking about my mistake."

The umpire has previously also courted controversy when he had staged a walkout after getting into an arguement with Tamim Iqbal during a Dhaka Premier League game.