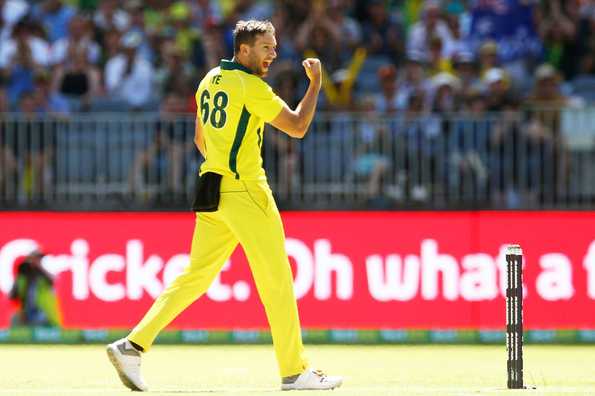 Andrew Tye combined decent pace with his clever variations to pick up his maiden ODI five-fer as Australia snuffed out England for a slightly below par total of 259 in thefifth and final game. Joe Root compiled a valuable hand of 62 for the visitors.

It was Tye who opened the doors for Australia to bounce back as he dislodged Jos Buttler with his knuckle ball to reduce England to 192 for 5. He then snared the wickets of David Willey, Root and Jake Ball, the last man, in the space of seven balls to provide the finishing touches.

For England, Root blended eye-catching shots with a diet of singles and twos to anchor the innings in the slog overs. He had a couple of close shaves, especially the upper cut off Mitchell Starc which fell just in front of the fielder positioned at third man. Eventually, Root was dismissed in the 48th over as Tye used another of those knuckle balls to add to his wicket tally.

Earlier, Jason Roy (49) and Jonny Bairstow had laid the platform for a substantial total. Roy, in particular, cracked some stunning shots to give the visitors a flying start. In the third over when Starc banged it short, he pulled it to the boundary hoardings. The aggressive batsman followed it up by crisply thumping the same bowler over long-off for a six.

He could have been dismissed the very next ball as he was caught behind off Starc but the left-armer overstepped and it turned out to be a free-hit. In the fourth over, he also crunched Josh Hazlewood for three fours. After composing a breezy innings he too fell to Tye.

Bairstow, his opening partner, Hales (35) and Buttler all made decent contributions but couldn't convert it into big scores. If not for Root's crucial innings, England could have subsided for an even lesser total.

History was also made in Perth on Sunday (January 28) as after years of planning, the (AUD) $1 billion Perth Stadium was unveiled. Matthew Page, the curator, seems to have prepared a good track, with mostly even bounce and a decent covering of grass to hold the pitch together.