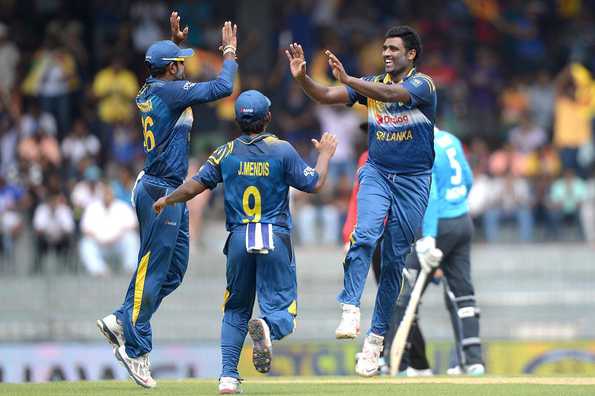 With Sri Lanka winning the first two games of the seven-match ODI series against England, the visitors will look to show their mettle and emerge victorious in the third match to be played at Hambantota.

On the other hand, the hosts would be delighted with getting back to winning ways especially, after they were clobbered 5-0 in India. Their top-order batsmen like Tillakaratne Dilshan and Kumar Sangakkara have been among the runs and their spinners with flight and guile have had England in a lot of trouble.

The visitors have been mainly let down by veteran batsmen, Alastair Cook and Ian Bell, who continue to wallow in the morass of mediocrity. Field restrictions, shorter boundary lengths, two new balls and fantastic bats have led to teams putting up monstrous scores on the board. However, ODI games are still based on the old maxim of top-order batsmen erecting a platform for the middle-order to cash in and accelerate in the end overs.

To make it worse, both Cook and Bell have time and again got out in a similar manner. For instance, in the first ODI, Bell, for the umpteenth time, followed a back of a length delivery outside the off-stump to edge it to the slip cordon.

When a team loses wickets upfront, it becomes doubly difficult for middle-order to come to the party, as the batsmen have to steady the ship and then only look to explore every nook and cranny of the ground with their wide array of shots. There is no doubt that England need to play James Taylor. Taylor is gift-wrapped with the ability to play power-packed shots. In short, one can test a youngster's temperament, only if he is given the chance to play.

On a positive note, Moeen Ali, shone brilliantly by notching up a dazzling hundred in the first ODI and Ravi Bopara has been in fine form. England's bowlers too have struggled to give a good account of themselves. In the absence of James Anderson and Stuart Broad, they lack the wisdom of experience and a fair bit of skill to keep the opposition in check.

Steven Finn can generate a decent steam of pace, but Chris Woakes, James Tredwell and Harry Gurney perhaps lack the penetration to do well on flat decks. To make it worse for England, they conceded 17 wides in the first game.

The hosts have bounced back rather well after putting up an enervated show in India. It has to be said though, playing India in India is always a tough proposition and even before this series started, not many expected England to come to grips with the conditions in Sri Lanka and perform.

At top of the order, Dilshan and Sangakkara have been consistent performers. Even Kusal Perera, the southpaw, played a mettlesome knock in the first game. However, Sri Lanka would feel the absence of Mahela Jayawardene, as the veteran batsman will miss the third game due to personal reasons.

In the bowling department, the spinners, Dilshan, Rangana Herath, Ajantha Mendis and even Jeevan Mendis have troubled the English batsmen from time-to-time. They have taken the advantage of England's age-old weakness against spinners.

England's batsmen also found it tough to pick Thisara Perera's length in the first ODI. He has a slingy action and when Perera especially, delivers the surprise short pitched delivery, the weight transfer of English batsmen seem to be a fraction too late. Angelo Mathews' captaincy has been praiseworthy as he has shown acute tactical awareness.

Weather forecast points to a thunderstorm in the afternoon. In the first few games played at Hambantota during the ICC Cricket World Cup 2011 and World T20 2012, the track offered decent carry for the pacers. But it is hard to envisage groundsmen preparing a track to suit the opposition's strengths. It also has to be said that the outfields in Sri Lanka have generally quickened up in recent times. However, rain may play spoilsport.

It will be good to get out of Colombo and start again. Credit to Sri Lanka. It is a seven-match series and we can bounce back: Alastair Cook, England's skipper, after they lost the second ODI.

It feels great. The bowlers set the tone for us. We still can improve: Angelo Mathews, Sri Lanka's captain, brimming with confidence after they emerged victorious in the second game.