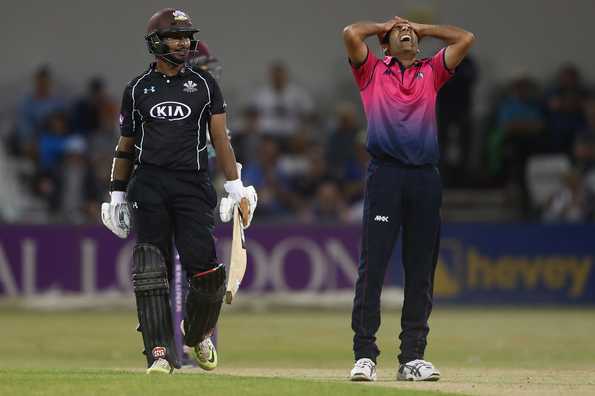 A day after his former Sri Lanka team-mate Mahela Jayawardene scored a century to guide Somerset into the semi-finals of the Royal London One-Day Cup, Kumar Sangakkara did the same as Surrey reached the last-four stage after clinching a thriller at the County Ground in Northampton on Thursday (August 18). Needing two runs off the final delivery, Sangakkara hit a boundary to seal the win.

Chasing 277, Surrey were cruising at 234 for 5 before the hosts staged a late comeback. Tom Curran, James Burke and skipper Gareth Batty were dismissed in quick succession with Sangakkara stranded at the other end. Last man Jade Dernbach joined the 38-year-old out in the middle following Stuart Meaker's run out as the equation boiled down to 12 from the final over.

Northamptonshire were on top after seamer Azharullah conceded only two runs off the first two deliveries in the final over, but Sangakkara tilted the balance in favour of the visitors with a superb six over fine leg to bring it down to four from three. Even a single off the final ball would have been enough for the visitors to progress on virtue of losing fewer wickets since the hosts were all out after opting to bat, but Sangakkara chose to finish it in style.

Earlier, despite losing Richard Levi, the in-form Ben Duckett and Rob Keogh cheaply, opener Josh Cobb was in a belligerent mood as he struck a 63-ball 66 that had three sixes in it. A late collapse then saw them tottering at 227 for 9 before South African seamer Rory Kleinveldt rescued them with a few lusty hits. He remained unbeaten on 76 off just 62 balls to help Northamptonshire to 276, which wasn't quite enough in the end.

Fine performances from Adam Lyth and Liam Plunkett helped Yorkshire confirm their spot in the semi-finals with a tense 11-run win over Kent. They will now play Surrey on August 28 for a place in the final.

After being asked to bat by Kent in Canterbury, Yorkshire made a nervy start by losing skipper Alex Lees early for 7. Joe Root, who had returned to the playing XI following the conclusion of England's Test series against Pakistan, then put on 90 for the second wicket with Lyth.

Following Root's dismissal for 45, Jonny Bairstow failed to make an impact as Charlie Hartley had his second victim. Following Lyth and Tim Bresnan's dismissals, the visitors struggled to accelerate at the death and ended up on 256 for 9 in their quota of 50 overs.

The hosts though began the run chase in a disastrous manner and were reduced to 66 for 4 by the 18th over. Darren Stevens and Alex Blakes then resurrected the chase with an 86-run stand for the fifth wicket. Both batsmen registered half-centuries before Plunkett and David Willey came back to dismiss the duo.

The lower order kept fighting till the end with some useful contributions, but failed to take the team over the finishing line. While Plunkett went on to pick four wickets, Willey finished with a three-wicket haul.