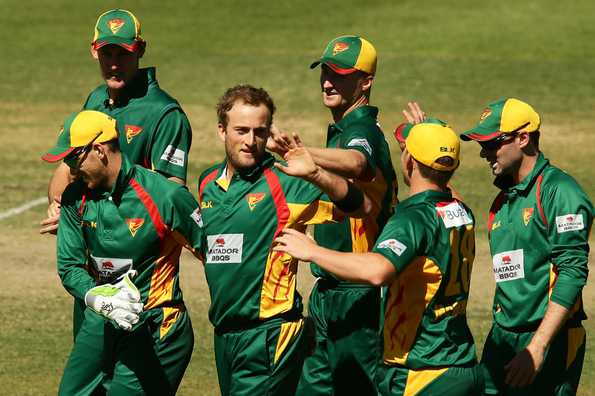 Tasmania managed to finish above South Australia in the final league standings of the Matador One-Day Cup following their 28-run win on Wednesday (October 19) at Hurstville Oval in Sydney. Seamer Cameron Stevenson picked up five wickets on his debut to star in the victory after half-centuries from Dom Michael and Alex Doolan helped them post a formidable total.

Needing a big win to make it to the finals, South Australia chose to bowl first after winning the toss. The move didn't pay off though as the Tasmanian batsmen dominated proceedings right from the beginning. Even though opener Beau Webster made only 9, he put on 45 for the opening wicket with skipper Tim Paine, who made 44.

Michael and Doolan stitched up a 63-run partnership for the fourth wicket before Travis Head broke the stand. Michael was dismissed for a 62-ball 57 that had four hits over the fence. Doolan then added 88 off just 84 balls for the fifth wicket with Ben McDermott to lead his side to a strong position. While Doolan made 77, McDermott scored 44 off 49.

Tasmania were pegged back a little in the end as both McDermott an Doolan fell in quick succession but all-rounder James Faulkner's fireworks at the death lifted them to a commanding 295. Faulkner hit four fours and a couple of sixes in his 18-ball 38 and was dismissed off the penultimate delivery of the innings.

Chasing 296, South Australia were off to an explosive start as Jackson Bird was hit for three consecutive boundaries in the very first over. Head, in particular, was very severe as he raced to 35 off just 15 balls before getting bowled by Webster three balls later. Jake Weatherald then took over from Head and added 38 runs inside four overs with Callum Ferguson to keep his side ahead in the chase.

Both batsmen though were dismissed in the space of six deliveries which completely shifted the momentum back to Tasmania. Ferguson was caught behind off Simon Milenko for 14 while Weatherald handed Stevenson his maiden wicket. With Bird proving to be expensive, skipper Paine persisted with Stevenson, who knocked back Jake Lehmann's stumps to pile on more pressure on the chasing side.

While Tom Cooper scored a half-century, the rest failed to compliment him from the other end. Stevenson picked up Adam Zampa and Joe Mennie's wickets in the end as a loss became inevitable in the 33rd over for South Australia when they were reeling at 210 for 8. Kane Richardson, who had a horrid day with the ball, looked to make amends with the bat and counter punched with a 21-ball 36 to revive some slim hopes before Stevenson capped off a brilliant debut by dismissing him for his fifth wicket. With three wins and three losses, Tasmania finished fifth in the points table, one spot above South Australia.