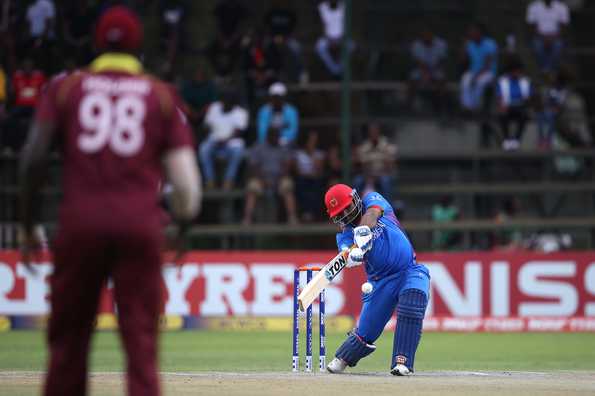 It took a long time, and the stars to unexpectedly align perfectly, for Afghanistan to eventually live up to the pre-tournament expectation, as they went one step ahead of confirming their 2019 World Cup qualification, and beat Windies in the final of the World Cup qualifiers. Even before Sunday's fixture had begun, the two finalists had already taken the last two vacant spots in the 10-team tournament, thus, raising question marks over the purpose and context of a final in a 'qualifier' tournament.

That however, didn't stop Mujeeb Ur Rahman and the top-order pair of Mohammad Shahzad and Rahmat Shah from giving a glimpse of what the top-eight teams can expect from this supposedly unfancied opposition in the showpiece event in England next year. From nearly a point of no return, due to defeats in the first three games of their campaign, Afghanistan stitched together five successive victory to eventually emerge the champions.

In chase of a measly 205, out came Shahzad in his ever-boisterous mood, pulling and flicking the ball in style, raising his back leg sometimes in peculiar but trademark fashion, and even holding the pose for the cameramen to click away while the ball was transported to the fence. The portly opener was quite serious when he finished his post-match presentation chat in the previous game with the words 'West Indies, we are coming'.

There was hint of scratchiness to the start of his innings, but the confidence and comfort came very soon. And once that happened, boundaries began to pile up as Jason Holder & Co. couldn't be penetrative enough with the low total hanging over their heads. Young Keemo Paul managed to end a breezy opening stand by dismissing opener Gulbadin Naib in the 10th over, but the second-wicket partnership - between Shahzad and Rahmat Shah - lasted for the next 21 overs, killing any hopes from the Windies camp to defend a sub-par score.

While Shahzad followed his 50-ball 54 in the crucial win against Ireland that sealed Afghanistan's qualification to the tournament proper, with a 93-ball 84, Rahmat scored a 78-ball 51 - his third fifty of the tournament - ending as Afghanistan's second-highest scorer with 234 runs. The pair added 90 runs together as the Windies hunt for a breakthrough remained elusive. When it eventually ended with Shahzad hitting one to Jason Holder at mid off, it was too late. Gayle managed to dismiss both the half-centurions but such was their contribution that Afghanistan strolled past the target by the 41st over. The comfortable walk in the park may have been carried out by Shahzad, who was circled around by rest of the jubilant Afghanistan players, but it was put on a platter for him and Rahmat courtesy the exploits of their teen prodigy Mujeeb Ur Rahman.

The off-spinner earned the first wicket for his team, that of the dangerous Gayle after Windies decided to bat first. The breakthrough was largely down to cover fielder Sharafuddin Ashraf who ran backwards and dived sideways to complete a stunning catch. Evin Lewis and Shai Hope's attempt to force the pace of the innings lasted all of 35 balls. Partnerships were kick-started in full earnest, but none lasted the anticipated distance as wickets kept tumbling regularly.

Windies lost half their side - including captain Jason Holder for a diamond duck - inside the first half of the innings for just 101 runs on the board, and turned to their lower order to bail them out and drag them to a position of respectability. Rovman Powell and Ashley Nurse answered the crisis call, to an extent, with the best partnership of the innings - worth 44 runs - but Mujeeb returned to rattle the lower-order. He accounted for each of the last three wickets to fall as Windies folded meekly in the 47th over.