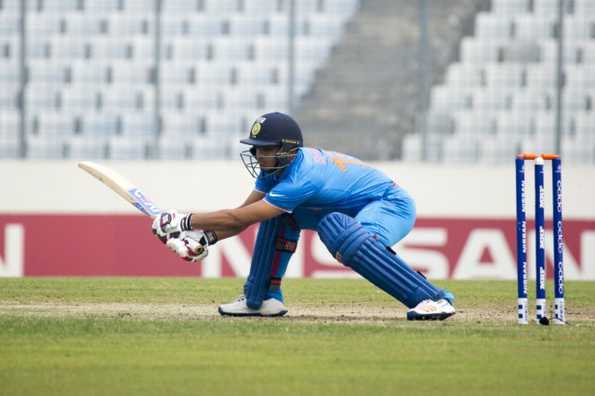 It's a busy Saturday at the Sher-e-Bangla stadium in Dhaka. The Indian team is engrossed in a few drills square of the wicket. High catches, ground fielding and much more. Ishan Kishan has to run back into the dressing room and return shortly in his full kits. Shimron Hetmyer joins him shortly. They are made to take a long walk across for the captain's photo shoot with the trophy. On the eve of the game, two highly confident bunch of tyros are getting ready for what will surely be the biggest day in their short cricketing careers thus far.

Ishan Kishan carries the weight of legacy. Three captains before him - Mohammad Kaif (2000), Virat Kohli (2008) and Unmukt Chand (2012) - have all won the trophy. Sunday's game will be India's fifth final in the brief history of the Under-19 World Cup, and the second for the West Indies, after 2004. Even at this level, the pressure on the left-handed opener is immense but he exuded a lot of confidence in the press conference.

"We will give our 100 percent. We have reached our goal following a certain plan, and now it is about following that plan again. That's most important. We will play the way we have been playing. Exams ka final hai tho thoda acha mark aa jaaye tho acha rahega (It's final exams, so if we get some good marks it will be nice)," Kishan said in the press conference on Saturday (February 13), to ease his nerves.

For the West Indies, it has been a fascinating tale of unpredictability. From being on the verge of getting knocked out by Zimbabwe, Hetmyer's boys, first upset the apple cart by gatecrashing the semis after beating Sri Lanka and then defied thunderous home support to get the better of Bangladesh. There is an unshakable sense of belief that comes across from the rejuvenated West Indies. They've upset two Asian sides, there's no reason why they should believe that they can't make it three in three.

"They (India) are a very good team and are unbeaten but two days ago we played against Bangladesh who were unbeaten. We beat them. I think it is not really about thinking whether they were not beaten in the tournament. We just go out and play our best cricket in the tournament, tomorrow. Let's hope we come out on top," Hetmyer said in his press conference.

Blunting each other's strengths on the field will be high on both the team's priority list. Ishan and Hetmyer were already laying the groundwork for it in the press conference.

One of the biggest clashes of the game could be between the Indian batsmen and the Windies pacers Alzarri Joseph and Chemar Holder. Kishan however, reckons facing excessive pace should not be a trouble for his boys.

"Most of us who are batting in the top order play domestic cricket back in India. We face senior fast bowlers in first-class cricket. In Ranji, Ashok Dinda bhai ko khelte hain hum, jab East Zone ka match hota hai (I play Ashok Dinda when playing East Zone matches). More than pace, it is how we handle them ," he said.

Leading in a World Cup final can often be a once-in-a-lifetime experience, and hence a bit overwhelming. Even as they put on a brave, confident face, the tension across the two camps is palpable.

"Tension is there before every match and this a World Cup final. West Indies have been playing well, they are not a weak team; not that we have underestimated any team in the tournament. We will try to eat as early as possible and go to sleep. Jyada sochenge tho dikat hi hota hai (If we think a lot, it will only create more problems). We will just play the way we have been playing so far," Kishan said.

All of us will remember our good performances. The more positive we stay before the match, the more helpful it will be.

For the West Indies, excitement and self-belief is in abundance. It's the same side that has gone from being blanked in a three-match ODI series in Bangladesh in January to a World Cup final, less than amonth later. Hetmyer & Co. take immense pride in their turnaround.

"It is very significant for us. We have not been in this space for about six years. For us being the team that's in the final, it is a very good feeling. We came a long way since January last year. We didn't really cope with what the coaches were putting in hands for us. Then to now, we have taken in a lot and come a long way. We have turned into a very good bunch of cricketers," Hetmyer said.

One common factor across both teams is that they have a few spectacular individual performers, who have the ability to take the duel to the next level. Both teams have had success with their faster bowlers and their batting at the top is largely aggressive. Where, then, will this contest be won and lost?

"If initially me and Pant stay till the 12th over then 300 is possible because we know how to rotate the strike, and when to hit. Our calculation is good. So, the focus will be to concentrate for the initial part of play. 270-280 will be good, but we will go for 300," Kishan said.

The West Indies will be wary of India's batting depth but also have their own weapon to counter. Hetmyer reckons his batters at the top of the order have fared better and suggests they should be able to deal with India's strong pace attack.

"We probably score better at the start, I would say. We have an explosive batsman in Gidron Pope. People have called him a young Chris Gayle. If he bats 20 overs for me, he will get more than a century. We have some very good batsmen in our team. They have some good pacers on top. I think our guys have done well against good pace attacks in this tournament. Their pace attack isn't too much different than what we have seen before," Hetmyer said.

Can India continue to be as clinical as they've been all through? Or will the West Indies spirit unnerve them? Can Sarfaraz dominate the West Indies pacers? Can Pope outclass India's sharp bowling unit? Can the Indian line-up overcome the pressure? Or Will West Indies dance their way to a historic moment?

Eitherway, a thriller is on the cards.