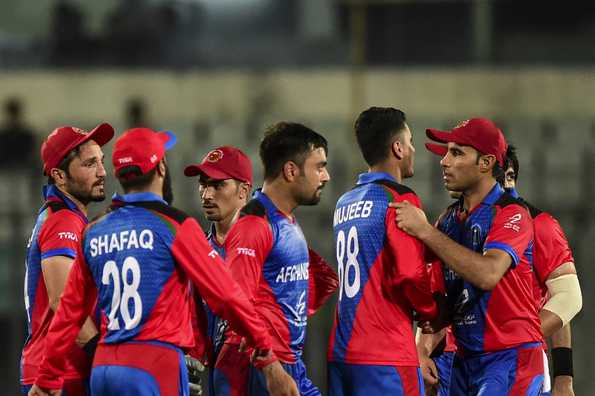 Shakib Al Hasan and Mosaddek Hossain took nine runs from the penultimate over to reach the target and seal Bangladesh's win with four wickets in hand and one over to spare. On a day when most batsmen struggled, Shakib stood out with his unbeaten 70. The victory will have little consequence, but will hold the hosts in good stead when they meet Afghanistan again in the tri-series final.

Shakib vs Rashid: When the best came against the best, the Bangladeshi won. In four balls against the leggie, in the 18th over, Shakib dispatched him for 13 runs, in an over where he ended up conceding 18. The match has turned in Bangladesh's favour now.

Afif Hossain is knocked over by the spin wizard - Rashid Khan.The youngster gets carried away and his bails are knocked over. Although Rashid is struggling, he's picked up his second wicket.

AND ANOTHER! Sabbir Rahman falls to the debutant Naveel-ul-Haq after getting a feather to the keeper! Afghanistan are crawling back into the contest. Much depends on Shakib here on.

Rashid isn't looking at ease, but still has Mahmudullah! The sweep goes wrong and he's trapped him in front. OUT!!

We're back after the break.

There's a power failure with one of the floodlights going off. There's an ucncalled for delay here.

REVIEW! It was wide down leg, but Afghanistan review a call for leg-before. Clipping, but not enough to overturn the decision. Shakib survives.

RAHIM FALLS!Unnecessary really for Mushfiqur. There was no need to take the man on on the boundary. He does and has to walk back. The stand is broken.

Shakib and Mushfiqur have added 50 runs for the third wicket. Bangladesh are 62/2 in 10 overs.

DROPPED!It was the substitute, who has come in in place Rashid Khan, who has made a mess of this straightforward chance. Mushfiqur survives.

Rashid walking off the field with a hamstring injury as he was trying to field that.Hopefully, he returns.

Bangladesh are in early trouble. Afghanistan get another as debutant Naveen-ul-Haq picks up his maiden T20I wicket.It was the slower ball as Shanto was deceived for pace. Ends up with a tame chip towards midwicket where Rashid Khan completes the catch. Bangladesh are 12/2.

OUT! Mujeeb strikes! Liton Das doesn't get much on it as he gets a bottom-edge straight to mid off for an easy catch to Asghar Afghan.

Mujeeb to start things off.

Rashid Khan and Shafiqullah Shafiq add 24 for the eighth wicket, to take Afghanistan to 138!They got off to a flier but lost their way thereafter. From being 75/0, they have been reduced to 138/7. Bangladesh were on their game once they got the inroad, thanks to Afif, who can't seem to do much wrong in the series. Anyway, should be a straightforward chase, but you never know. Join us for the chase.

BOWLED HIM! Bangladesh are all over the opposition!Full, straight, sneaking in between bat and pad and gone! Saifuddin continues to impress. Najibullah departs.

OUT! Run-out this time.Bangladesh have pulled things back spectacularly. Afghanistan are slipping, and fast. Gulbadin Naib the one to depart. 96/5...

Shakib has Nabi trapped plumb in front. Given. Out!Missed it completely and moment he did, he knew it was going to hit.

Leading edge straight back to the bowler, and gone! Afghanistan have gone from 75/0 to 80/3!Can you believe it? Gurbaz departs for 29.

DOUBLE STRIKE!Asghar Afghan looks at getting a move on right from the onset and ends up holing out in the deep. Two wickets in the over for Afif after Shanto takes a good running catch. Double-wicket maiden for Afif!

First over for the first time in the series, and strikes with the third ball! Zazai plays against the spin to scoop it to Mustafizur.There's the breakthrough they were looking for! And it's the danger man. He departs for 47 off 35. Afif has his maiden T20I wicket!

After a slow start, the openers have added 50 runs for the opening wicket.

DROPPED!Poor effort from Mahmudullah in the end. Big top-edge but the fielder can't hold on. Rahmanullah Gurbaz survives.

Afghanistan's openers are in the middle. Here we go.

Naveen-ul-Haq will make his debut for Afghanistan.

TOSS: Bangladesh have opted to field

Good evening and welcome to the sixth T20I - the last of the league game - of the tri-series between Bangladesh and Afghanistan. With Zimbabwe out of the reckoning for the final after being knocked out, this is a dress rehearsal for the final. The last time the two teams met, the visitors pipped the hosts. In fact, Bangladesh haven't beaten Afghanistan in their last 4 T20I clashes. Can that change today? Join us in a bit for the toss.